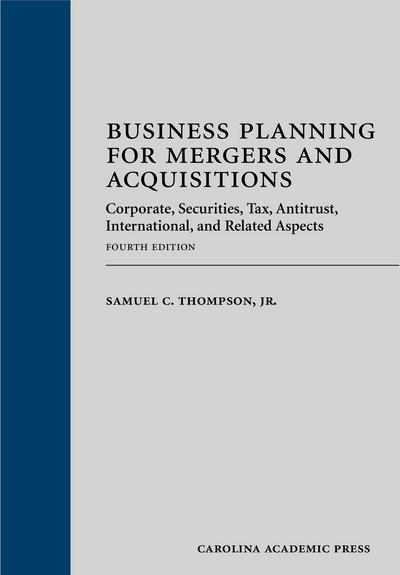 Business Planning for Mergers and Acquisitions

M&A Statutes, Rules, and Documents Supplement for Business Planning for Mergers and Acquisitions, Fourth Edition, is available to access by clicking here.

This book provides a transactional approach to many of the issues that arise in mergers and acquisitions (M&A), including corporate, securities, antitrust, Federal income taxation, accounting, and valuation. The principal purpose of this book is to help train law students in the art of doing M&A deals. The statutes, rules, regulations, and documentary appendices referred to in this book are contained in a companion volume: Thompson, M&A Statutes, Rules, and Documents for Business Planning for Mergers and Acquisitions (Carolina Academic Press, 2015), which will be available at no cost on this page at the end of April 2015. The book is divided into four parts: Part I, The Building Blocks; Part II, Consensual Transactions; Part III, Hostile Transactions; and Part IV, Special Topics.

This edition follows the structure of the third edition with the following major changes and additions: