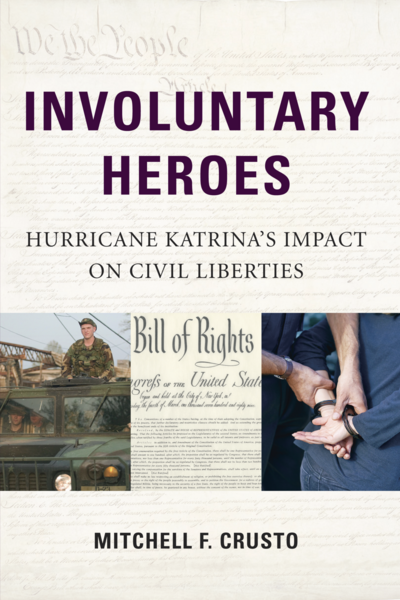 We are taught that the Constitution guarantees us certain civil liberties, such as the freedoms of religion and assembly and the right to bear arms. We are not taught that none of these rights are absolute and that the government can regulate these rights. We are also not taught that the government has the power to infringe on people's civil liberties, subject to varying levels of judicial review. The protection of civil liberties is especially important when there is an emergency or crisis, raising the question of whether or not we need an emergency constitution. While this question has been raised when there is a national disaster, it is also a significant issue when there is a regional or state-based emergency, such as the one that resulted from Hurricane Katrina.

Following an increasing number of emergencies throughout the country, including Hurricane Sandy, the Ferguson, Missouri, unrest, and the Ebola outbreak, there is a need to assess whether our civil liberties are protected in these circumstances. On the tenth anniversary of Hurricane Katrina, this book explores how state emergency laws impact constitutional civil liberties by examining the experiences of Hurricane Katrina's "involuntary heroes," those whose civil liberties were infringed upon by the government and who ultimately received little to no redress in the judicial system for their suffering. It is essential reading for constitutional scholars and for members of the general public who truly want to understand constitutional rights within the context of this historic crisis.

"Involuntary Heroes, Professor Mitch Crusto's latest work of breathtaking scholarship, has the potential to revolutionize the way ordinary Americans and scholars alike remember Hurricane Katrina's legacy. By rescuing from obscurity the unsung or nearly forgotten heroes of Hurricane Katrina, Crusto advances a radical idea: constitutional safeguards are needed most during emergencies, not only to protect the civil rights of the minorities among us, but also to preserve the hard-won freedoms of the majority from government encroachment."
—D'Ann Penner, author of Overcoming Katrina: African American Voices from the Crescent City and Beyond

"Involuntary Heroes details many of the injustices thousands suffered in the fresh hell of Katrina Examples include stories of tourists wrongfully imprisoned for weeks; people fleeing floodwaters turned away at gunpoint from their own dry neighborhoods by police; homeowners arrested and beaten in their own homes by law enforcement; women raped; prisoners confined in feces-filled waters; officials allowing the elderly and sick to die unattended in public; and police murders of innocent people. Professor Crusto carefully tells these stories, thoughtfully analyzes the legal wrongs committed, and painfully describes the frequent failures of the courts to give justice. This book is a must-read for all who care about the Katrina experience and what it means for our country. It illustrates how much further we have to go to make civil rights, civil liberties, constitutional rights, human dignity, and justice real for all our people all the time."
—Bill Quigley, author of Storms Still Raging: Katrina, New Orleans and Social Justice

"A devastating exposé of how, in tragic man-made emergencies like the post-Katrina flooding, our commitment to civil liberties falters and citizens' lives do not seem to matter. Hopefully, by presenting awful truths, this book will help prevent such betrayal when the next emergency arises."
—Sheryll Cashin, author of The Failures of Integration and Place Not Race

"I cannot think of anyone better to talk about the human costs and legal implications of Hurricane Katrina than Mitch Crusto. He is an esteemed scholar in diverse areas of law with a deep personal knowledge of New Orleans. This book is a profound statement about a sad event that has taught us how much farther we must bend the arc of history toward justice."
—Frank Rudy Cooper, editor of Masculinities and the Law: A Multidimensional Approach (with Ann C. McGinley)

"This book is a great historical lesson about the lives disrupted and civil liberties lost when government confiscates firearms from law-abiding citizens, rendering natural disasters all the worse." — Stephen Halbrook, author of The Founders' Second Amendment

"Involuntary Heroes: Hurricane Katrina's Impact on Civil Liberties is a powerful reminder of how quickly constitutional rights can be eroded during tragedies such as Hurricane Katrina. Mitchell Crusto eloquently reminds us of the suffering endured by New Orleans residents whose lives were traumatized as much by the denial of their constitutional rights as by the terrible storm they endured. Involuntary Heroes should be required reading for every American." — William Ferris, Author of The Storied South: Voices of Writers and Artists
"In his carefully researched and well written book, Professor Crusto shows that our system utterly failed Katrina's "involuntary heroes." But he lights the way to assuring that the mistakes of the past will not be repeated in the future."
— Daniel F. Attridge, Professor of Law at The Catholic University of America
"Much was lost when the levees protecting New Orleans collapsed—including the civil liberties of many New Orleanians. Professor Mitchell F. Crusto's incisive analysis of the collapse of constitutional protections in the wake of an American catastrophe is both illuminating and deeply troubling." — John Biguenet, author of The Rising Water Trilogy and Silence