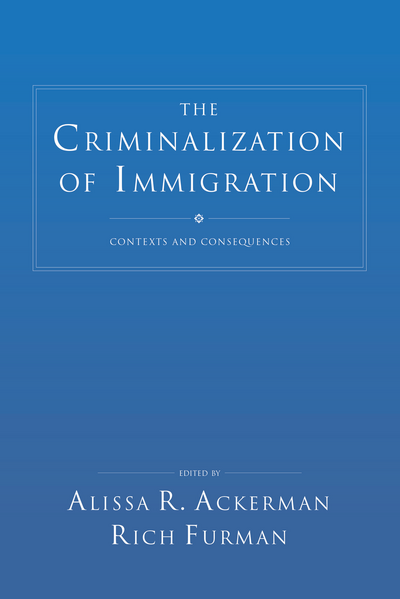 The Criminalization of Immigration

Immigration has become an increasingly popular topic often leading to passionate and powerful debate. The visceral emotions that stem from such debates transcends fact and paves the way for value conflicts over what it means to be an American. For most of our history, one of our most important narratives has been that we are a country that was built by and for immigrants. Indeed, the inscription on the Statue of Liberty reads, in part, "Give me your tired, your poor, your huddled masses yearning to breathe free." For many generations we welcomed new generations of immigrants who added new levels of richness and possibility to our nation. This certainly influenced U.S. policy on the handling of immigrants, refugees, and asylum seekers. Yet, at the same time, a coexisting argument threatened this discourse. In this story, America is a country for Americans, and is threatened by "others". While this part of the story is certainly not new, it has resurfaced in the wake of September 11th and, even more recently, has become a political tool utilized to serve the interests of those in power. \

The Criminalization of Immigration: Contexts and Consequences explores these competing narratives and the consequences of criminalizing immigration in the United States and abroad. It examines the impact of national, state, and local legislation on the psychosocial well being of immigrants. The book explores key ways in which immigration is criminalized, and examines how the problematization of immigration becomes a political tool. The first chapters of the book explore the criminalization of immigration through the lens of pacification and the theater of cruelty. In both chapters, the authors seek to understand the process of "othering" members of the immigrant population to exact social control and to mollify the public. These front chapters set the tone for remainder of the book. They provide the impetus for why states have enacted, or have attempted to enact state level immigration laws that make it nearly impossible for the undocumented to live within the boundaries of these states. In section two, three U.S. states are highlighted: Arizona, Alabama, and Indiana. While the chapters on Arizona and Alabama summarize key aspects of state laws, author Sujey Vega highlights the life of one undocumented immigrant as she navigates life in the Heartland.

The book then turns its focus to the criminalization of immigration in a socio-political context. Here, four chapters provide explorations of the criminalization of immigration on labor standards enforcement, immigrant detention, the right wing perspective in the United States and in Europe, and white supremacy. Labor standards impact the rate by which undocumented immigrants are paid, which in turn impacts their health and safety within and outside the workplace, protections from workplace discrimination, and collective activity protections. The criminalization of immigration erodes many of the workplace and labor protections that we have come to view as essential. Similarly, the privatization of corrections has influenced the incarceration and detention of many undocumented immigrants and has even influenced the very laws described in section two of this book. If not for the possibility of profiting off of the detention of the undocumented, many of immigration related laws would not have come to fruition.

The final chapters of the book put the human face on the criminalization of immigration. Each chapter represents a case study of a specific aspect of the criminalization of immigration. They approach the issue from the viewpoint of a day laborer, an undocumented woman who has become a victim of domestic violence, a child whose parents are undocumented, and a detention officer who wrestles with his decisions to continue his job. Regardless of which chapters one reads, the raw emotion felt by placing oneself in each context is overwhelming.

Overall, The Criminalization of Immigration: Contexts and Consequences provides a complete examination of an issue that cuts through emotional value conflicts. It provides the facts and knowledge essential for a fair and balanced debate.

PowerPoint slides are available upon adoption. Sample slides from the full 107-slide presentation are available to view here. Email bhall@cap-press.com for more information.