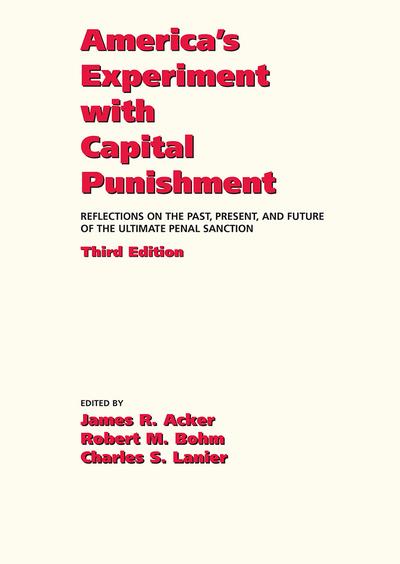 Reflections on the Past, Present, and Future of the Ultimate Penal Sanction

The third edition of America's Experiment with Capital Punishment has been expanded and updated to include several important developments since the publication of the second edition in 2003. New evidence is presented about the incidence of wrongful convictions, racial and geographical disparities in capital charging and sentencing practices, deterrence, trends in public opinion, jury decision-making, how the capital punishment process affects the families of both murder victims and offenders, the conditions and consequences of death row incarceration, the financial costs of capital punishment, executive clemency, and many other issues. Renewed attention is given to execution methods (focusing on lethal injection), capital punishment for persons with intellectual disabilities, and other matters of significance. Legal developments also are chronicled, including trends in the Supreme Court's interpretation and application of the "evolving standards of decency" and related Eighth Amendment principles, the prohibition against executing juvenile offenders, significant changes in federal habeas corpus policies, and the repeal of death-penalty statutes in several states. New chapters have been added to address the historical evolution of capital punishment (John Bessler), and the death penalty for persons with mental disabilities (Christopher Slobogin). Several additional authors have joined to produce the updated chapters.

The book's twenty-six chapters critically analyze the history, politics, law, empirical evidence, and principled underpinnings of the contemporary debate about the death penalty in America. They also assess likely future trends in capital punishment law and practice. Written by the country's leading legal and social science scholars, the chapters collectively represent the most comprehensive and illuminating treatment of death penalty issues presently available in a single volume.

PowerPoint slides are available upon adoption. Sample slides from the full, 112-slide presentation are available to view here. Email bhall@cap-press.com for more information.

"[I]t helps us reexamine our options that include highly flawed "reforms" and a death penalty that continues to be applied arbitrarily or the demise of the death penalty." — Leona D. Jochnowitz, Criminal Law Bulletin