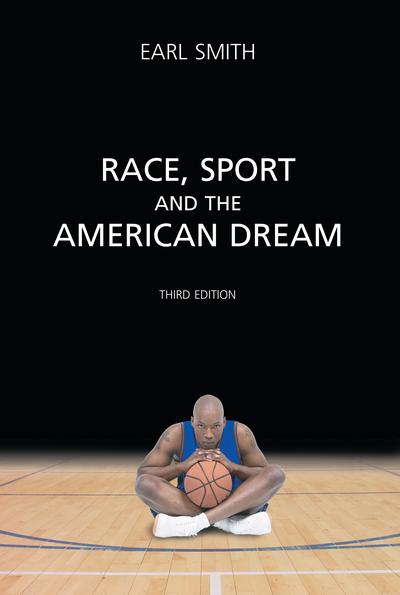 Race, Sport and the American Dream

Race, Sport and the American Dream (2007) won the annual North American Society for the Sociology of Sport Best Book Award, announced at the Society's 2008 annual conference.

Race, Sport and the American Dream reports the main findings of a long term research project investigating the scope and consequences of the deepening relationship between African American males and the institution of sport. While there is some scholarly literature on the topic, author Earl Smith tries to understand through this project how sport has changed the nature of African American Civil Society and has come to be a major influence on economic opportunities, schooling and the shaping of African American family life.

The third edition of Race, Sport and the American Dream improves upon the second edition in four key ways: (1) by updating the empirical data so that it is the most current on the market, (2) by expanding the discussion of the Athletic Industrial Complex (AIC) to include a robust discussion of the explosion of Conference Realignment, (3) by expanding the discussion of leadership in SportsWorld to include the most current theory in the area of sports management and (4) by adding an entirely new chapter on male athletes and violence against women.

In addition, the third edition expands the discussion of the elusive American Dream and the role of sports in accessing better life chances, success and happiness. The third edition of Race, Sport and the American Dream also includes a discussion of the increased role that social media plays in SportsWorld by allowing everyone and anyone to become a "sports critic" as well as a discussion of race in SportsWorld in the era of changing the racial landscape of the US. Specifically, the US has become more racially diverse and critics are debating the role that the election of the first African American president plays in this changing landscape. All in all, the third edition of Race, Sport and the American Dream expands on existing discussions and provides new areas of inquiry.

This book is intended to provide social scientists and others interested in sports with an understanding of carefully selected issues related to the African American athlete. Smith examines the world of amateur sports (Olympic and intercollegiate sport) using Immanuel Wallerstein's "World-Systems Paradigm" which provides a lens with which to examine the colonizing and exploitative nature of intercollegiate sports and the special arrangements that universities have with SportsWorld.

All of the topics in this book are addressed within the context of the history of racial oppression that has dominated race relations in the United States since its inception as a nation-state in the 1620s. Across a variety of topics including sport as big business—which Smith terms the Athletic Industrial Complex—to criminal behavior by athletes, to the lack of leadership opportunities for African American athletes, to the question of the biological superiority of African American athletes, Smith argues that any discussion of race and sport must be understood within this context of power and domination. Otherwise the importance of the question itself will always be (a) misunderstood or (b) underestimated.

"Dr. Earl Smith's 3rd edition of Race, Sport and the American Dream is much-needed scholarship for understanding the life chances for not only young African American athletes — competing in a new global sports marketplace — but their family's investments in sports. His analysis is crisp, insightful and he brings to this 3rd edition new empirical evidence for understanding a whole set of interlocking and very complicated issues that have exploded in SportsWorld since the 2nd edition, including, but not limited to: NCAA conference realignment and its impact on college athletes; violence against women perpetrated by college and professional athletes; and a complex theoretical analysis of the decline of Black head coaches, especially in college and professional football and other challenges African Americans face in their lives after sports."

— Kenneth L. Shropshire, David W. Hauck Professor at the University of Pennsylvania's Wharton School of Business, Director of the Wharton Sports Business Initiative. His most recent book is Negotiate Like the Pros: A Top Sports Negotiator's Lessons for Making Deals, Building Relationships and Getting What You Want.

"Earl Smith has been a scholar on the issue of race and sport for many years. His Race, Sport and the American Dream is essential reading for anyone interested in the subject. He organized the book in a clear layout that puts forth an important lens on the issue. He gives us theory that demonstrates the mighty struggles of African Americans in sport but also is real-life enough to help us feel both the pain of the barriers and the joy in overcoming them."

"This well-documented book provides insights into race and sport, as African American athletes have made their way along the path toward an equal playing field and the American dream. Summing up: Recommended."