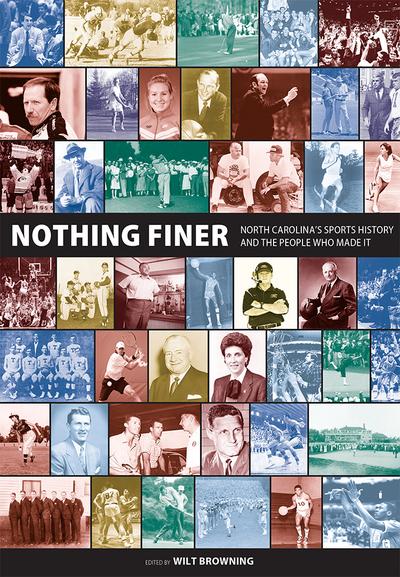 North Carolina's Sports History and the People Who Made It

The idea for Nothing Finer grew out of several years of work by Wilt Browning with the North Carolina Sports Hall of Fame, specifically the writing of biographies of nominees who would be considered for induction. Again and again, that annual exercise was a reminder of just how deep and how rich North Carolina's sports heritage is. And again and again came the thought that there ought to be a history of sports in the state, yet how daunting such an endeavor would be.

When it became clear that Nothing Finer would require a deep and rich understanding of the events of perhaps 200 years of various competitions in the state, the scope began to narrow; only one group has served as witness to that history in significant stretches — sports writers. Browning, himself an award-winning editor and columnist, began gathering a team in a manner not unlike a coach on a recruiting mission, and he wound up with a group of writers whose skills and understanding of North Carolina's sports history are unrivaled.

Jim Sumner, longtime staff member of the North Carolina Museum of History, signed on to write about the genesis of our passion for sports. Browning, who was an editor and columnist for both the Greensboro News & Record and the Asheville Citizen-Times, drew his strong suit of baseball. Al Featherston, formerly of the Durham Herald-Sun, became the point man on basketball (he also is a nationally renowned expert on Civil War history). Rob Daniels, also a Greensboro journalist, presented the football segment and Lee Pace, a longtime journalist and historian, contributed the golf perspective. Multi-talented Lenox Rawlings, nationally known Hall of Fame sports columnist for the Winston-Salem Journal, gave us an unvarnished look at racing's checkered history, and Tim Stevens of the Raleigh News & Observer offered his contribution as the state's foremost authority on high school athletics. Former Greensboro sports staff mates Larry Keech and Bill Hass brought their perspectives to the table on the diversity of sports in this state and the stunning number of national championships North Carolina's collegiate sports teams have won since Wake Forest's baseball team achieved the state's first in 1954.

In total, what you have in the pages of Nothing Finer is the work of men who, collectively, have spent more than 300 years watching and writing about the sports North Carolinians play. A must-have for anyone wanting to know anything about NC sports – in any field! One can easily see how this book would be at the top of anybody's Christmas List.

"This book is a must-read for every North Carolina sports fan, and for anyone with a general interest in the history of this great state and its culture."
— From the Foreword by John Swofford, Commissioner of the Atlantic Coast Conference