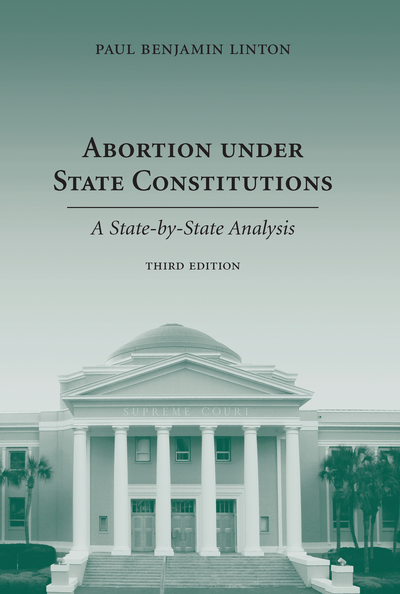 Abortion under State Constitutions provides the only comprehensive analysis as to whether States may enact and enforce prohibitions, as well as regulations, of abortion. The third edition summarizes the relevant case law in those States whose supreme courts have already recognized a state right to abortion (one-fourth of the States) and gives a detailed analysis as to whether such a right would likely be recognized in States whose courts have not yet considered the issue (three-fourths of the States). The third edition includes an updated discussion of state challenges to abortion regulations, state constitutional amendments relating to abortion and various statutory developments. This edition also includes an appendix of the constitutional provisions cited and a topical index.

"[A] very thorough and engaging study, a must-have tool for all engaged in this . . . important challenging work in the legislatures and courtrooms of the several states." — Richard Garnett, Professor of Law, Notre Dame Law School

". . . a remarkable tour de force of research and exposition. . . . Linton . . . has provided the definitive answer to the oft-asked question, what happens if Roe v. Wade (1973) and Planned Parenthood v. Casey (1992) are overruled? The breadth and depth of his effort is arresting. . . . a reference work of inestimable utility." — David Forte, Professor of Law, Cleveland-Marshall College of Law

". . . a necessary tool for anyone seeking to predict the consequences of a United States Supreme Court decision overruling Roe v. Wade. . . . Regardless of readers' political views, Abortion under State Constitutions promises to inform, intrigue, and inspire those who care about the issue of abortion." — Teresa S. Collett, Professor of Law, University of St. Thomas School of Law

"Abortion under State Constitutions is sure to become the standard reference work for those concerned to resist (or to promote) a right to abortion founded on . . . state constitutions." — Richard Stith, Senior Professor of Law, Valparaiso University School of Law

"Paul Benjamin Linton is one of the most thoughtful, insightful, and thorough legal authorities writing about biomedical ethics and law. Among his past masterpieces are influential law review articles analyzing suicide, euthanasia, same-sex marriage, equal rights, state abortion regulation, and abortion decisions of the U.S. Supreme Court. Now, Linton examines how abortion regulations have fared and would fare under state constitutions. Abortion under State Constitutions is a convincing explanation of the growing importance of state constitutional jurisprudence in controlling the regulation of abortion. The book is an invaluable, timely resource for lawmakers, judges, legal scholars, students, and anyone else interested in the constitutional, legal policy, and social strategies concerning the regulation of elective abortion in America." — Lynn D. Wardle, Bruce C. Hafen Professor of Law Emeritus, J. Reuben Clark Law School, Brigham Young University

"Linton provides comprehensive information about abortion under the constitutional framework of every state. Not only is every relevant constitutional decision concerning abortion described, but for states where courts have not directly addressed the question, Linton examines the constitutional text and state court opinions for constitutional provisions (such as freedom of religion and rights to privacy) that are potentially relevant. Scholars interested in how state courts have grappled with the question of abortion rights . . . will find this book invaluable." — S. Lemieux, Hunter College, CHOICE Current Reviews for Academic Libraries