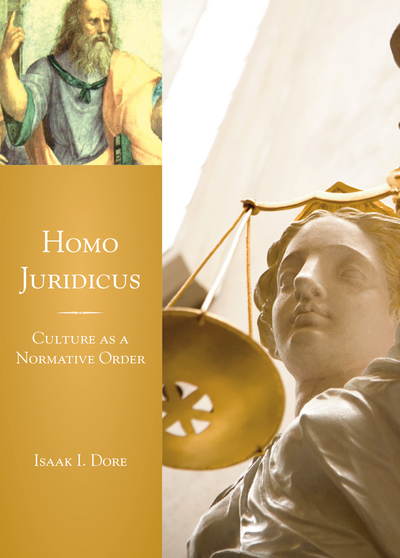 Culture as a Normative Order

by Isaak I. Dore

Homo Juridicus focuses on the normative foundations underlying all socio-cultural formations. The book uses the concept of "normativity" in an inclusive sense. It includes law, but it is not limited to it. As such, it explores the various social and cultural forces that persuade, incite, seduce, influence, direct, restrain, repress or control behavior. It is a major interdisciplinary study cutting across several disciplines of social science, such as law, anthropology, sociology, psychology, linguistics and philosophy. Its primary audience is law students, as well as the scholarly community across law and the social sciences.

"Isaak Dore is one of the very few scholars who straddles a broad range of legal and nonlegal disciplines. This important book deconstructs the idea of normativity in culture and illuminates it through various strains of thought in anthropology, sociology, psychology, linguistics and philosophy. Its grasp of these disciplines is impressive in terms of nuance, breadth, particularity and lucidity. It is a unique work, brilliantly executed, providing a rich background against which the promotion of social order through legal and nonlegal norms can be evaluated. It both provokes and compels one to think outside of the conventional structures and assumptions of law and social order. I know of no other work that offers the broad intellectual reach that this ambitious book presents."

"Isaak Dore has developed a remarkably new and rich approach to the study of legal and nonlegal aspects of normative order in culture, a field of growing interest in Europe. The sheer range of disciplines drawn upon, as well as the provocative analyses will have wide appeal within the scholarly community."

"Isaak Dore's book is an impressive accomplishment, systematically tracking anthropology from its early days to the contemporary period, from Spencer to post modernism and all the major schools of thought in between. Throughout, he adds important insights by uncovering and interrogating assumptions about law, social order, and normativity."