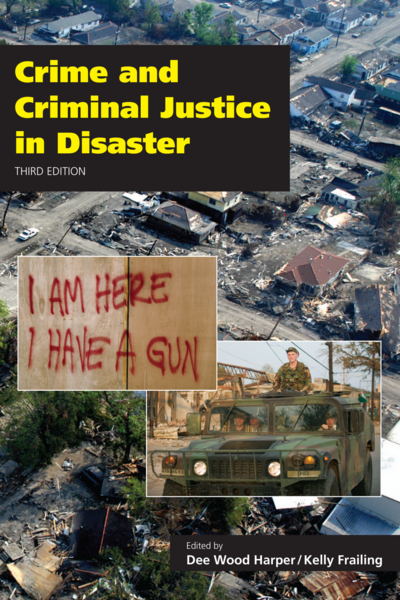 Crime and Criminal Justice in Disaster

Crime and Criminal Justice in Disaster aims to answer two questions: Why do some people take advantage of the disruption that disaster causes to commit crime, and what can be done about it?

The third edition of Crime and Criminal Justice in Disaster includes a complete updating of the chapters from the second edition and focuses on crime in the wake of recent disasters, including Hurricane Sandy, Typhoon Haiyan and the Ferguson riots. The authors of the essays in this volume, all talented sociologists, criminologists and law enforcement officials who have had direct experience researching and working in disaster conditions, have updated their original work to investigate the long-term effects that disaster can have on crimes such as rape, fraud, looting, domestic violence, hate crimes and even homicide. They have also worked to explain the actions criminal justice and other systems can take in the short and long-term disaster aftermaths to combat and prevent crime. The revisions to the third edition of Crime and Criminal Justice in Disaster help bring us closer to a criminology of disaster and set the stage for new theorizing and research that can help us more fully understand the criminogenic effects of disaster and the best practices for criminal justice and other systems in preventing these effects.

PowerPoint slides are available to professors upon adoption of this book. Download sample slides from the full 263-slide presentation here. If you have adopted the book for a course, contact bhall (at) cap-press (dot) com to request the PowerPoint slides.

Praise for the Second Edition:

"The second edition ofCrime and Criminal Justice in Disasterprovides a novel look at the various forms of crime that can develop during and after disasters. From street crime to elite crime and everything in between, the chapters provide solid data on the myriad social control challenges disasters present. Authors take on important topics in the field, such as the conditions under which post-disaster looting occurs, increases in violence against women that often accompany disasters and disasters that occur as the result of corporate crime. Many findings in the new edition of Crime and Criminal Justice in Disaster call into question taken-for-granted assumptions about disasters and their effects, while others suggest important questions for further research."
— Kathleen Tierney, Professor of Sociology and Director of the Natural Hazards Research and Applications Information Center at the University of Colorado at Boulder

"For decades researchers have often described the post-disaster environment as a 'therapeutic community,' a place where people come together and do whatever it takes to restore normalcy to their lives. While this pattern of prosocial behavior prevails in many cases, the revised edition of Crime and Criminal Justice in Disaster reminds us that there is also a dark side of disaster. For communities with unusually high crime rates, widespread poverty, and rampant political corruption, for example, disasters can sometimes make matters even worse. In some cases, disasters such as oil spills and levee failures are crimes themselves, stemming from the negligence of extremely powerful actors. While past research has focused primarily on how organizations respond to disasters after they occur, this volume reveals how the actions or inactions of governments and corporations can actually precipitate disasters in the first place. This timely and important book is extremely well written and engaging; it contains contributions from many of the most widely known and highly respected scholars in the field, and it will be a valuable resource for courses in disasters and emergency management, criminology and criminal justice, sociology, political science and public administration."

— Gary R. Webb, Department of Public Administration, University of North Texas, former member of the Center for the Study of Disasters and Extreme Events at Oklahoma State University