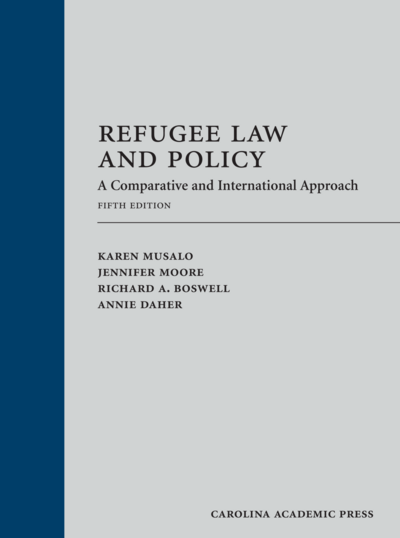 A Comparative and International Approach

The fifth edition of Refugee Law and Policy, which reviews legal developments through early 2018, provides a thoughtful scholarly analysis of refugee law and related protections such as those available under the Convention against Torture. The book is rooted in an international law perspective and enhanced by a comparative approach. Starting with ancient precursors to asylum, the casebook portrays refugee law as dynamic across time and cultural contexts.

Although Refugee Law and Policy is directed toward students of US law, it draws on the legislation, jurisprudence and guidelines of other Refugee Convention and Protocol signatories, including Canada, the United Kingdom, Germany, Australia, New Zealand, and South Africa. The casebook is up to date on developments to harmonize refugee policy within the European Union, and includes discussion of relevant EU directives. Refugee Law and Policy also compares current trends in refugee law to parallel trends in human rights and humanitarian and international criminal law. In its treatment of both US and global trends, Refugee Law and Policy examines some of the most controversial contemporary issues in refugee law.

This edition incorporates discussion of reforms and developments stemming from 9/11 and the wars in Iraq and Afghanistan, the Syrian refugee crisis, and the increase or "surge" in refugees entering the US as a result of rising violence in the northern triangle countries (El Salvador, Honduras, and Guatemala) of Central America over the last decade. It expands its focus on the denial of access to the territory of the country of asylum through use of interdiction, as well as expedited removal and similar "accelerated" procedures. It also discusses punitive measures intended to deter asylum seekers, such as the increased use of detention.

Refugee Law and Policy also carefully examines developments in the substantive interpretation of asylum claims. This edition includes substantial materials on the cutting-edge area of social group claims and their relevance to claims for protection based on gender-based persecution and LGBT status, as well as in the context of claims based on fear of gangs. It includes an extensive discussion of the "social distinction" and "particularity" requirements, which have had a significant impact on the scope of protection. Since the casebook addresses both substance and procedure, with a focus on practice as well as theory, it is an excellent text not only for students, but for practitioners and those in government agencies as well.