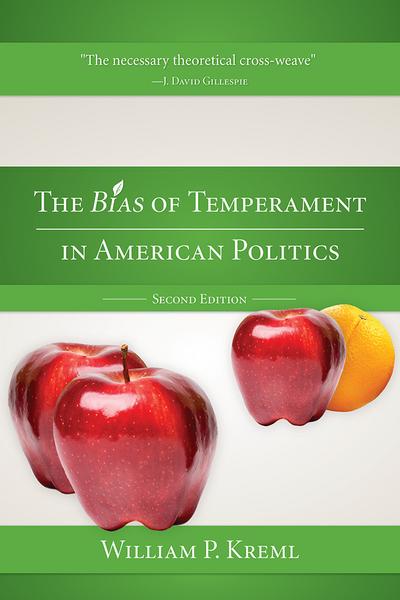 The Bias of Temperament in American Politics

The 2016 paperback printing, seen here, is a reprint of the 2014 second edition, originally printed in hardback.

Beginning with The Anti-Authoritarian Personality, published in 1977, Prof. William P. Kreml has sought to construct an original political philosophy based upon psychological—or subjective—variables rather than the traditional objective variables of race, gender, social and economic standing, and the like. Kreml contends that "for every objectivity there is a subjectivity," meaning that a cross-weave of psychological variables play an important role in everything from personal ideology to the cognitive biases that underlie the structures of the American government. This book builds upon earlier writings and suggests that a great deal of the functional difficulty that the American government faces, as well as the inequity of the American political and legal systems, originates from psychological biases in favor of the extrovert over the introvert personality type and the analytic over the synthetic cognitive preference as it is found in different personalities. Kreml suggests constitutional and sub-constitutional remedies for these biases.