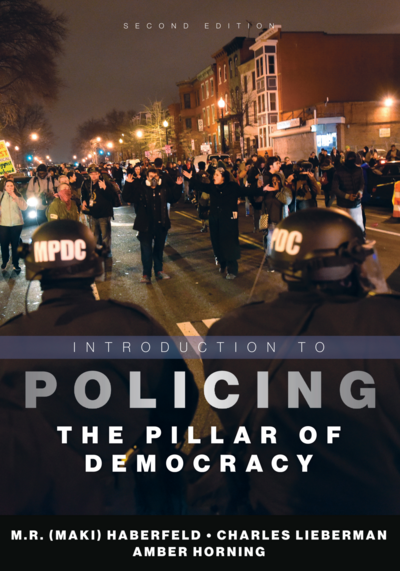 Introduction to Policing: The Pillar of Democracy, Second Edition

The Pillar of Democracy

Introduction to Policing: The Pillar of Democracy is an introductory textbook focused on the underlying reasons why policing is conducted the way it is, why police officers police the society in the manner they do, and, finally, why law enforcement is perceived and criticized by the public the way it is. As indicated in the title, the book weaves the themes of democratic principles into the chapters. Through addressing the basic blocks of fair and professional policing, the understanding of democracy from the prism of certain police actions or inactions becomes comprehensible from a very pragmatic perspective. Other introductory policing textbooks simply concentrate on the functions of policing or on the processes that cause officers to feel the way they do, but without explanations of police functions in democratic societies.

The second edition updates the first, based on various developments in the field that were observed in the past couple of years. From the “Fergusson effect” to “Black Lives Matter,” movements influenced police community relations around the country and around the world and generated much attention to the way police train and equip its officers. Also covered are a number of high profile terrorist attacks. These attacks, in the US and other countries, further underscore the role of the police officer as a warrior and not necessarily just as a guardian. Developments in police accountability, transparency, and technology alter the ways police departments train and respond to calls for service.

Whether democracies are developed or are developing, they consistently provide more freedoms for their citizens than others. The basic principle of the “majority rule,” which is based on elections that are procedurally and substantively fair, is the rule of thumb around which certain themes of this text will be addressed. Civil rights, civil liberties, and due process embed many of the operational realities of policing. Whether one addresses notions such as use of force, search and seizure, discretion, sub-culture, or intelligence gathering, it is always done from the perspective of the need to preserve precisely these themes, which are part of the human rights and civil rights concepts which underlie any type of democratic society.

The following Teaching Materials will be available electronically:

Two sets of PowerPoints will be available to adopters:

“As a retired police officer (Columbia, MO Police Dept.) turned college professor (Kirkwood Community College), I’ve been searching for a text that is this well researched and written for many years — at last I’ve found it. Authors Haberfeld, Lieberman, and Horning, in Introduction to Policing: The Pillar of Democracy, have delivered a text that cuts to the very heart and soul of policing in the United States. From the earliest days of policing to modern times, the authors have captured and communicated the true essence of policing communities in a way that is easily understood and appreciated by students, as well as other readers of this text.

Captured within the pages of this text is the essence of policing that I and other Criminal Justice faculty members attempt to convey to our students on a daily basis. There is no guessing about the meaning of the content — it is delivered in a straightforward manner.

My profound thanks to my sisters and brother in blue who have produced this outstanding piece of academic literature. I have found my 'forever' text.” — Michael Penrod, Kirkwood Community College

“I have been a police officer for 25 years and an adjunct professor for many years at the University of Houston-Downtown. I have used various textbooks to teach my Policing System class. I'm glad I found Introduction to Policing: The Pillar of Democracy. There is a huge difference between policing in a democratic society vs. a totalitarian one. This book illustrates perfectly how police officers truly serve the citizens in a democratic society whereas police officers in a totalitarian government only serve the needs of those who are in power. This book is very well-researched with many anecdotes and analyses to clarify the authors’ major points of view. Many thanks to the authors—Haberfeld, Lieberman, and Horning—for putting together a great book which will certainly influence our students’ thinking about democracy in a positive light."— Nathan Nguyen, University of Houston-Downtown