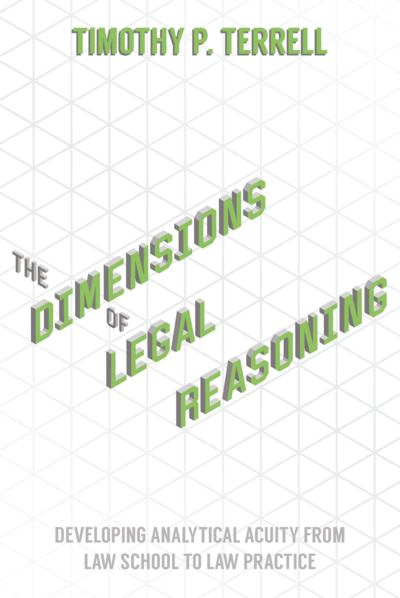 The Dimensions of Legal Reasoning

The audience for The Dimensions of Legal Reasoning is quite broad — from legal beginners to seasoned practitioners. Although it begins with attention to some of the basics of legal thinking, it progresses quickly to fundamental issues of legal theory and current legal conflict. The book's goal is to delve deep into the thought process of lawyers and judges confronted with difficult controversies requiring sophisticated analysis. The book creates an ambitious four-part model of the most critical elements within legal reasoning — nuances of language, varying circumstances, disputed values, and the roles of political institutions — to demonstrate the inevitability, but structured predictability, of legal disagreement.

To initiate its analysis of difficult decision making, the book uses a famous, and controversial, call by a baseball umpire, and then contrasts it with Justice John Roberts' famous comment that judges should simply "call the balls and strikes." The tension between these incidents is then referenced throughout the text to develop the special, and quite challenging, character of legal reasoning.

The book argues that legal reasoning is unique in its simultaneous concern with several unstable analytic elements: language (our concern with the nature of texts), circumstances (both factual situations and legal categories), values (both individual rights and social outcomes), and political structure (the relationship between courts and legislatures).

By using this approach, The Dimensions of Legal Reasoning seeks to improve the analytical perspectives at both ends of the professional spectrum. Law students will be able to appreciate earlier than they usually do the mental agility, rather than memorization prowess, that law practice will require of them. Experienced lawyers will gain a more explicit understanding of the professional acumen they bring to bear when they analyze issues and construct arguments, allowing them to deploy those skills more effectively and explain them clearly as they train their younger colleagues.