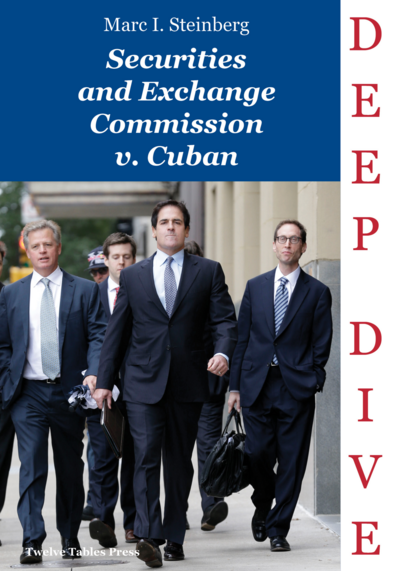 by Marc I. Steinberg

This experiential book focuses on the Securities and Exchange Commission's (SEC) enforcement action charging Mr. Mark Cuban with illegal insider trading. Mr. Cuban is a well-respected entrepreneur, businessman, and investor whose ownership interests include the National Basketball Association's (NBA) Dallas Mavericks. Mr. Cuban also is one of the principal investors on the reality television program Shark Tank. His net worth is valued in the billions of dollars. The author (Marc I. Steinberg) was retained as an expert witness in this case on Mr. Cuban's behalf. Professor Steinberg therefore had the opportunity to experience this litigation from the playing field rather than as a spectator. These insights enhance the book's substance and vitality. In captivating fashion, the book presents key documents, testimony, and insights from the start of the SEC's investigation of Mr. Cuban's trading of Mamma.com stock through the end of the trial, which ended with the jury exonerating him. This five-year saga came at a high cost to the government and Mr. Cuban. In his successful defense, Mr. Cuban reportedly spent $12 million in legal fees in defeating the government's charge that he was a fraudster. For the SEC, after years of vigorous pursuit with less than a formidable case, it incurred a significant defeat. In the end, when Mr. Cuban emerged victorious and the government packed its bags, questions were raised as to strategic decisions made, the high costs of defending one's good name, the limits of government prosecutorial discretion, and the breadth of our insider trading laws. This book focuses on this intriguing litigation, drawing the reader's attention as the story unfolds.