John R. Sharp worked as a linguist and analyst for the U.S. Federal Government for over 40 years, teaching and writing curricula for Modern Standard Arabic and several Arabic dialects. During his studies in Cairo, he became fascinated with Egyptology and the ancient Egyptian language, but was frustrated at not finding a good, searchable index of pharaohs' cartouches (name rings), so he decided to make one himself, a project that took several decades. He lives in Hawaii. 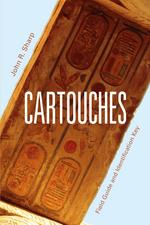