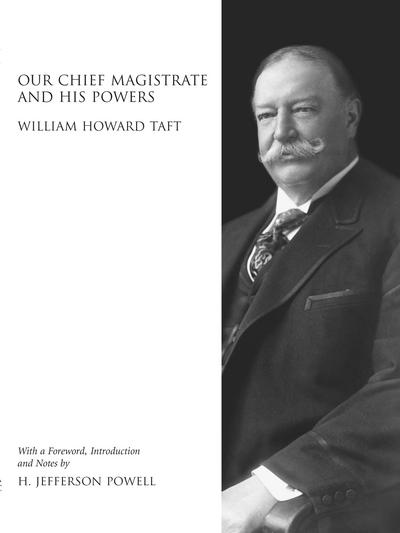 Our Chief Magistrate and His Powers

William Howard Taft is the only individual to have served as both the President and the Chief Justice of the United States of America. In the years between the two appointments, Taft taught law at Yale University and gave a series of lectures in which he reflected on the theory and the practices of the presidential office. Taft's lectures have long been out of print, but are now available with a new foreword, introduction and endnotes by constitutional law scholar H. Jefferson Powell. Powell shows how Taft used his lectures to deftly and humorously reply to the criticisms of his predecessor, Theodore Roosevelt, and the pretensions of his successor, Woodrow Wilson. The lectures in the volume create an image of the presidency that is wise and chastened, and one that honors the president's duties to the law and to the demands of political leadership.

"This is a delightful little book, and Powell serves as a sure guide to its main theses. Its re-issuance is welcome, and its argument for the constitutional and legal exercise of executive power bears serious reflection." — Claremont Review of Books, Spring 2004