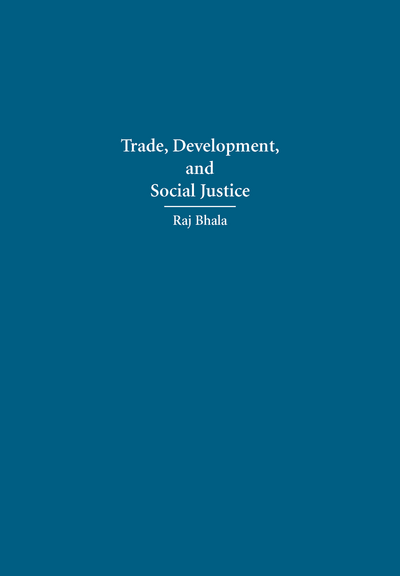 Trade, Development, and Social Justice examines the greatest challenge currently facing the global trading system: the large and growing divide between the First World and the Third World. This schism threatens to tear apart the GATT-WTO system. Eclectic in both its theme and methodology, Trade and Development positions itself as a moderate book, in both substance and tone. In a world of loud and sometimes violent protests about globalization and its effects on poor countries, this book offers a reasoned and empathetic approach.

Using five arguments (Marxist Origins, Capitalist Growth Models, Organizing Trade Rules, Special and Differential Treatment Rules and Trade Rules and Social Justice), this text advances the thesis that international trade law neither is as unjust toward poor countries as critics of the GATT and WTO claim, nor is the law as just toward them as GATT-WTO defenders contend. Bhala uses tools from economic development theory, specifically, from the Marxist-Leninist critique of trade, and from the capitalist models of economic growth constructed by leading economists. The book also uses tools from theology, specifically, Catholic and Islamic concepts, and principles of social justice. Additionally, Trade, Development, and Social Justice proposes specific improvements to make international trade law more socially just.

This book is part of the Studies on Globalization and Society Series, edited by Raj Bhala, Rice Distinguished Professor, The University of Kansas School of Law.

"This particular assessment is a long overdue analysis of how many participants view the entrenched framework for modern international trade. For anyone seeking balance, this work is a venerable presentation of how nations talk past each other in the supposed world trade dialogue between the Haves and Have-Nots." — American Society of International Law Newsletter, March 2004