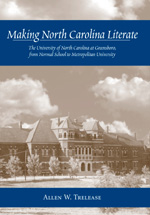 The University of North Carolina at Greensboro, from Normal School to Metropolitan University

THIS TITLE IS OUT OF PRINT.

Founded in 1892 as North Carolina's first state college for women, the State Normal and Industrial School quickly transcended its name and original mission. From the beginning, founder and first President Charles Duncan McIver and his colleagues strove to attain full college status, centering on the liberal arts. By 1919, that goal was a reality and the institution became the North Carolina College for Women. McIver's successor, Julius I. Foust, set out to make it the state's university for women, parallel to the university at Chapel Hill. That dream evaporated in the Depression as the Chapel Hill, Raleigh, and Greensboro campuses consolidated under a single board and most of the graduate work went to Chapel Hill. The Greensboro campus became the UNC Woman's College, or WC. In 1963, all the UNC campuses became coeducational and WC became the University of North Carolina at Greensboro, or UNCG.

UNCG has become a metropolitan university — a category sometimes called the land-grant universities of the 21st century. Like its peers, UNCG offers an education of national, if not worldwide, repute, yet draws the great majority of its students from the surrounding Greensboro/Winston-Salem/High Point metropolitan area. Three-quarters of its students now live off campus; and reflecting its Woman's College origins as well as a national trend, two-thirds are female.

This book traces the many, sometimes dramatic changes seen at the school/college/university from its 1892 beginning until 1994. They include the physical campus; administrative leadership; faculty organization, status, and professional allegiance (the institution versus one's academic discipline); the curriculum; student identity, culture, and struggles to win freedom from parietal regulations; and shifting alumni relations.

For many years, a perception of underfunding and neglect from above bred identity problems on campus. Recent years brought other problems, from campus expansion and resultant friction with its neighbors, to controversy over athletic scholarships, to a brief war over control of the Alumni Association. Making North Carolina Literate should be of interest to UNCG alumni, faculty, and students; to readers concerned with North Carolina history, women's history, and the history of higher education.

"Despite Trelease's long association with UNCG as a professor of history, he is concise and unsentimental in his appraisals… The result is a well-written, often witty account of the growth of an educational institution and its larger place in North Carolina and the nation." — News & Record

"The content and bibliography of this book, a comprehensive work in progress for over a decade, testify to the author's dedicated research and inclusion of a variety of campus constituents." — The North Carolina Historical Review

"[H]ood's meticulous research, his exploration of the rural reform experience during the Progressive era, and his willingness to place his topic in a larger historiographical context make it a useful model for others to test how representative Nelson and Washington Counties were." — The Journal of Southern History