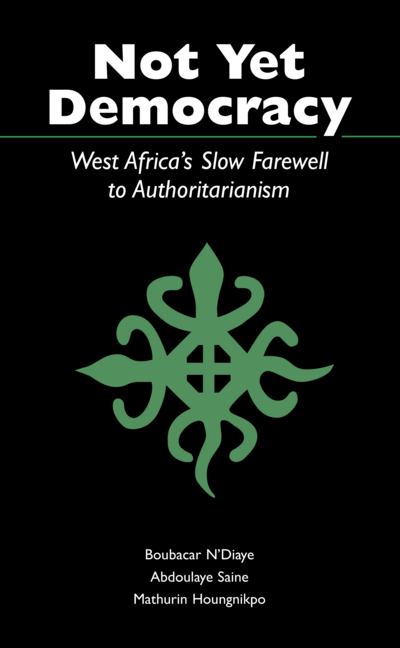 In a way, this book is historically a sequence to Kenyan statesman Ojinga Odinga's Not Yet Uhuru. It echoes his admonition, a generation ago, that ominous indications in the policies, behavior, and attitudes suggested that freedom was not, as yet, achieved even as colonialism came to an end. More than a decade into the democratization era, Not Yet Democracy's scrutiny of one third of West African states similarly suggests that, generally, the sub-region most affected by militarism and autocratic rule is emerging from the gripping embrace of authoritarianism extremely slowly indeed.

Through a close analysis of an edifying sample of states, this book documents and illustrates how the experiment of abandoning authoritarianism has typically unfolded in West Africa. It singularly contributes theoretically and empirically to the ongoing debate both in academia and in popular circles on the pace, prospects, and dynamics of democratization and de-militarization of political life in the sub-region. The authors highlight the historical continuity both of military interference and elite rivalries over state control discernable in the agonizingly slow and unsettled transformation of West Africa's political landscape.

The study is also a critical exposé of how the post-1990s crop of political leaders have (mis)handled the second chance afforded them to grant Africans long-denied basic human, political, and civic rights, which were, after all, the main promise of political independence a generation ago. The book proceeds on the analytical proposition that, against the background of shared praetorianism and military politicization, there is a discernable connection between the singular itineraries West African regimes have followed in their unsteady efforts to overcome a damning history of authoritarianism. The five chapters richly illustrate these intricate connections and their implications for the fortunes of the democratization movement in the sub-region as a whole. A sobering conclusion is that it will take time and much disillusionment for entrenched militarism and anti-democratic practices to disappear from West Africa.

"This is a thorough study of democratization and authoritarianism in West Africa. Summing Up: Recommended." — CHOICE Magazine, 2005