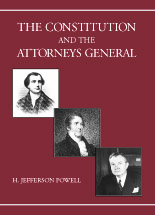 The Constitution and the Attorneys General

Since the beginning of the Republic, the President's chief advisor in the interpretation of the Constitution has been the Attorney General. The opinions of the Attorneys General on constitutional topics are official statements of the executive branch's views, and in many circumstances where a constitutional question cannot come before a court, their opinions provide the final answer.

This book offers the most important constitutional opinions of the Attorneys General and the Department of Justice from Edmund Randolph (President Washington's first Attorney General) to Janet Reno. Powell's commentary provides biographical and historical context to enhance the reader's appreciation of the opinions, which cover such topics as the separation of powers, the authority of Congress and the President over matters of war and peace, the nature of citizenship, and the executive's responsibilities with respect to statutes that the President believes unconstitutional.

The opinions are presented in full text and with original pagination, making The Constitution and the Attorneys General a fully independent research tool. A variety of indices and tables give the reader full access to the executive branch's two-century-long tradition of construing and applying the Constitution.