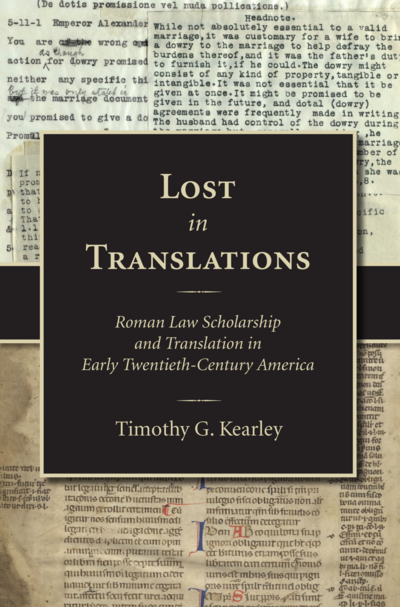 Earlier generations of Americans were connected to the classical past—to ancient Greece and Rome—to an extent we find hard to understand today. The Founders' training in Latin and ancient history led them to model their new nation after the Roman Republic, and most educated Americans had broadly similar skills and knowledge until the early twentieth century. Lost in Translations describes how this connection helped inspire men who were educated in the late 1800s to dedicate much of their lives to translating fundamental documents of Western Civilization—such as Justinian's Code—and to write extensively about Roman law. This book addresses the history of American education (including legal education), as well as the function of Roman law among the elite bar. The book also uses correspondence and other previously unpublished information to humanize such major figures as Roscoe Pound.

Lost in Translations focuses on five Roman law scholars (all but one of whom were trained as lawyers) who worked early in the twentieth century: Samuel Parsons Scott (1846–1929), Charles Sumner Lobingier (1866–1956), Charles Phineas Sherman (1874–1962), Fred H. Blume (1875–1971), and Clyde Pharr (1883–1972). Among them, they produced the first English translations of the Codex Theodosianus and Justinian's entire Corpus Juris Civilis, as well as other ancient Roman laws. This book describes their heroic and often solitary labor, some of which they did not see come to fruition in their own lifetimes. It should be of interest to historians, lawyers, educators, and classicists.

Praise for Lost in Translations:

"... Kearley has written an informative and enjoyable book that sheds light on both the educational interests of early Americans and the lives and work of five individuals who greatly influenced the study of Roman law. ...
Legal historians, librarians, and book lovers will likely be pleased with Lost in Translations. It is a quick and enjoyable read, and is recommended for law libraries, particularly those collecting in the areas of Roman and civil law, and for other libraries with classically focused collections." — Susan Gualtier, Law Library Journal Vol. 111:2