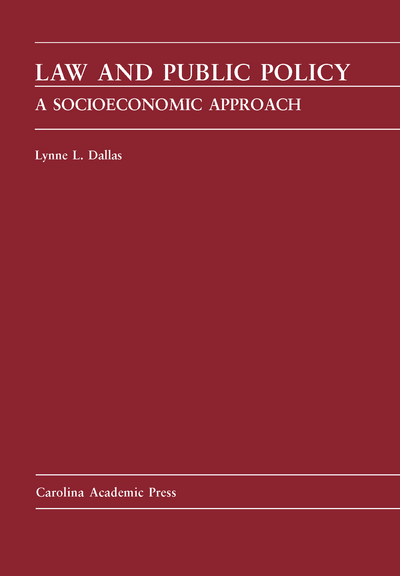 Tags: Culture and Law, Economics and Law, Science and Law

This is the 2018 paperback printing of the casebook published in 2005.

Law and Public Policyprovides rich course materials that permit students to explore the interrelationships between law and economic/social processes in a variety of contexts. It draws on many economic approaches (not only neoclassical economics) and other social sciences, such as psychology, sociology, anthropology and political science, for the tools of public policy analysis. It offers students an interdisciplinary, values-based approach to public policy that takes into account the power implications and distributional effects of laws and emphasizes attention to historical context, philosophical beliefs, culture, existing institutions, working rules and sources of power.

The textbook begins with an introductory chapter on law and socioeconomics, followed by background chapters on legal regulation and cognitive psychology; economic fairness and human well-being; legal compliance and legal socialization; culture, norms and legal regulation; and cooperation, trust and the law. These chapters address such issues as the significance of the rationality assumption to legal regulations, the relevance of customs and conceptions of fairness to legal, political and economic decision making and the relationship of moral orientation to judicial and administrative decisions. The textbook includes chapters on race, gender and other forms of discrimination; the domain of markets, which includes the issues surrounding surrogacy contracts and egg donors; the complex interrelationships between legal regulations and changing norms in the society, workplace and within families; corporate governance issues in the wake of Enron; social responsibility issues confronting domestic and multinational corporations; globalization, including the impact of globalization on U.S. and foreign workers due to trade and capital liberalization; and problems of emerging market economies. Each chapter contains extensive notes that provide information and questions to serve as the basis for vigorous class discussions.