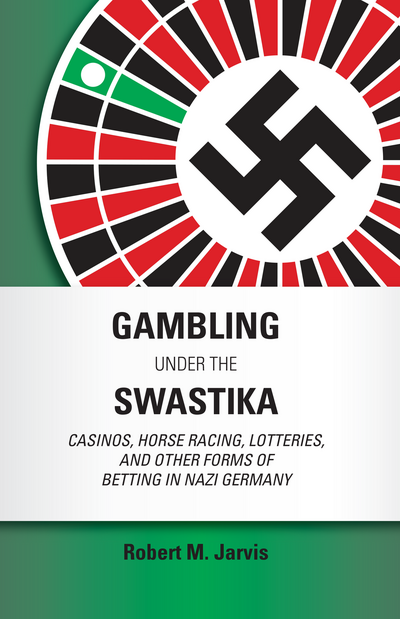 Gambling Under the Swastika

Casinos, Horse Racing, Lotteries, and Other Forms of Betting in Nazi Germany

Although much has been written about the Nazis, one aspect of their rule has been all but overlooked: gambling. While philosophically opposed to gambling, in practice the Nazis relied on gambling to prop up Germany's economy, earn hard currency, and wage war. In this engaging new work, Professor Robert M. Jarvis (Nova Southeastern University) presents the first comprehensive look at gambling in the Third Reich.

After summarizing Germany's pre-Nazi gambling laws, Jarvis describes how, within months of coming to power, the Nazis re-opened Baden-Baden's famed casino (shuttered since 1872), took control of the country's horse tracks, and encouraged citizens to play the lottery (to fund social welfare programs). With the advent of war, the Nazis' use of gambling increased. While in some countries (such as the Netherlands) the Nazis used gambling to curry favor with the local citizenry, in others (such as Poland) gambling became another means of waging war.

Jarvis also takes readers inside the Nazis' concentration and prisoner of war camps, where illicit gambling flourished. Other subjects covered include the Nazis' treatment of compulsive gamblers, their suppression of dog racing (due to the country's progressive animal welfare laws), the use of gambling to carry out espionage missions, and the Nazis' special rules for gambling by Jews.

Relying on an impressive wealth of domestic and foreign sources, Jarvis has crafted an important new account of the Nazi regime. The book includes exhaustive notes, a comprehensive bibliography, a detailed index, and 45 illuminating photographs.

Advance praise for Gambling Under the Swastika:

"Jarvis tells his story with the skillful craft of a croupier and the in-depth knowledge of a casino baron." — David Clay Large, author of The Grand Spas of Central Europe: A History of Intrigue, Politics, Art, and Healing

"Jarvis's discoveries provide a far more nuanced portrait of gambling in Nazi Germany than has been previously seen." — David G. Schwartz, author of Roll the Bones: The History of Gambling

"Based on solid academic research, Jarvis has made a significant contribution." — I. Nelson Rose, co-author of Blackjack and the Law

"An engrossing read — Jarvis has given us a fascinating look at an unexplored aspect of Nazi Germany." — Ronald J. Rychlak, author of Hitler, the War, and the Pope