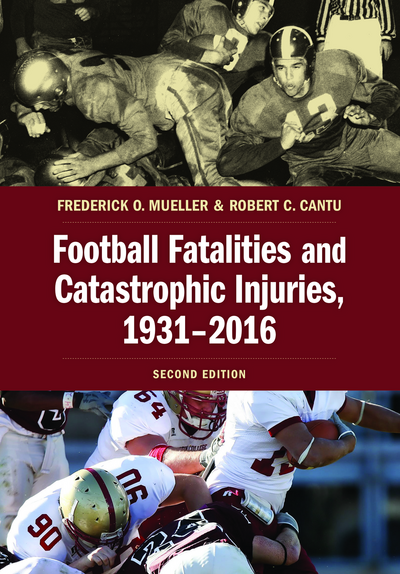 Ever since the first collegiate football game on November 6, 1869, the need to reduce injuries has played a major role in finding ways to improve the safety of the sport through rule and equipment changes. This new edition includes chapters that discuss the history of football injuries by decade (1931–40, 1941–50, etc.) and critically analyze important circumstances in football that have played a role in fatal and catastrophic football injuries (equipment, rules, coaching, medical care, etc.). The second edition also adds the completion of a chapter covering 2001-2010 and adds data collected for the years 2011-2016.

New chapters cover the history of brain and spinal injuries, concussions, CTE, history of NCCSIR, history of NOCSAE, and non-traumatic/exertional injuries. There is also information on how the detection and treatment of football injuries have changed during the past 85 years. The NOCSAE chapter discusses the history of NOCSAE and its effect on helmet standards and the reduction of football fatalities and catastrophic injuries. The chapter on the NCCSIR discusses the many changes that have taken place since Dr. Kucera became director. The chapters on concussion and CTE, written by international expert Robert C. Cantu, MD, outline the major concerns in these areas.

"The facts are shocking, sobering, and ultimately sad, especially with so many of the catastrophes occurring at the high school level.…The authors' data show that while some progress has been made, more must be achieved. This book will be a useful addition to libraries serving sports enthusiasts. Summing Up: Recommended. Lower-division undergraduates through professionals/practitioners." — CHOICE Magazine