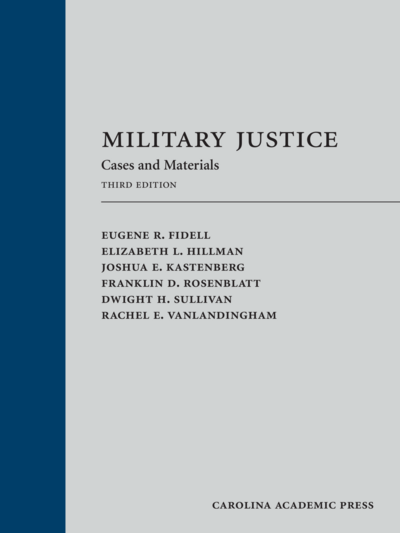 There are already many articles and books about military justice, but the third edition of Military Justice: Cases and Materials is different. Rather than offering a staid recitation of military court rules and cases, this volume gives law professors a powerful tool to introduce students to military justice while also deepening their understanding of criminal law and procedure, comparative law, international law, and constitutional law. At a time of ongoing combat operations and high-profile courts-martial, students and professors now have a new framework through which to analyze and evaluate worldwide military justice.

This casebook facilitates a deep understanding of military justice, its underlying principles, and lessons provided by international norms and comparative analyses of foreign systems. The book’s examination of the U.S. court-martial system allows students to explore the role and operation of military justice and the principles of a democratic society. In an era of worldwide deployments, multi-national operations, and global as well as domestic terrorism, the book illuminates the interconnectedness of military justice systems through a far-ranging collection of judicial opinions, statutes, regulations, commentaries, and scholarship. While the materials presented draw heavily from the United States, most chapters also present materials from other jurisdictions to enhance students’ appreciation of both the American experience and the availability of alternative approaches to military discipline, accountability, and punishment.

The book begins with an overview of the nature of a military justice system and its component parts. Chapter 2 explores the central issue of the commander’s role in military justice while Chapter 3 addresses the related concept of summary discipline. Chapter 4 then assesses professional responsibility rules for military lawyers.

The next group of chapters examines the fundamental question of who may be tried by court-martial, the offenses that permissibly fall within a military justice system’s ambit, and unique military crimes. An analysis of how the obligations of military service might alter the protection of fundamental rights follows before the book turns to the military judges and jurors who comprise the court-martial, the rules of evidence military judges apply, and the punishments a court-martial may impose. The system’s review and appellate procedures are then analyzed, followed by a group of chapters assessing the special contexts in which military justice systems operate. First comes a broad appraisal of the challenges a military justice system faces during combat and peacekeeping operations, then a consideration of the role of military commissions, with a special emphasis on the post-9/11 military commission system the United States operates at Guantanamo Bay.

The book’s final chapter gives students a timely glimpse into the changes that lie ahead by focusing on the critical processes of legal reform and globalization.