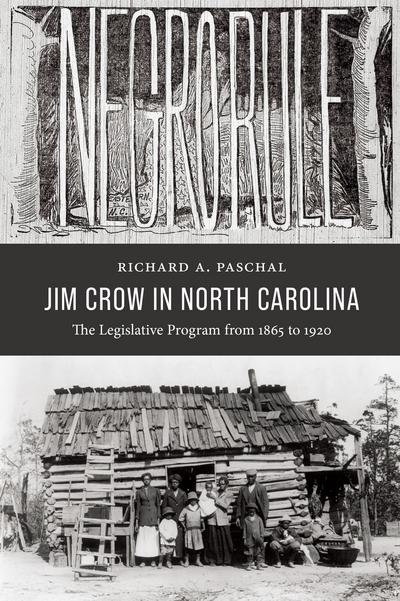 by Richard A. Paschal

This book is a comprehensive study of the Jim Crow laws in North Carolina from 1865 to 1920. While it catalogs all of the laws enacted by the North Carolina legislature during those years, the laws and statutes do not fully explain the true extent of racial discrimination created through the implementation of those laws. The author demonstrates how de jure discrimination in North Carolina was not simply a result of the Jim Crow statutes but was imposed through the operation of law and, in turn, how the operation of law was itself affected by societal attitudes.

Paschal argues that the application and implementation of North Carolina's laws were more important in terms of the actual discrimination experienced by African Americans than the statutory texts. He contends that the racial contagion which swept the state during the elections of 1898 and 1900—the White Supremacy Campaigns—dramatically changed white attitudes and, consequently, the operation of the law. This book provides an in-depth history of the shadow that Jim Crow casts over North Carolina and the nation.

"This book provides an in-depth history of the shadow that Jim Crow casts over North Carolina and the nation."

"Paschal, a Raleigh lawyer who holds a graduate degree in history, argues that it was not so much the laws on the books that brought about and maintained the segregated and oppressive system sometimes branded as "Jim Crow." More important, he says, were the longstanding community standards and customs and the allocation of community resources by the dominating white power structure."

"Paschal has written a wonderful book, which is a must-read for those interested in how Jim Crow developed and spread in North Carolina. ... Paschal's writing is engaging, and the scholarship is impeccable and very thorough."