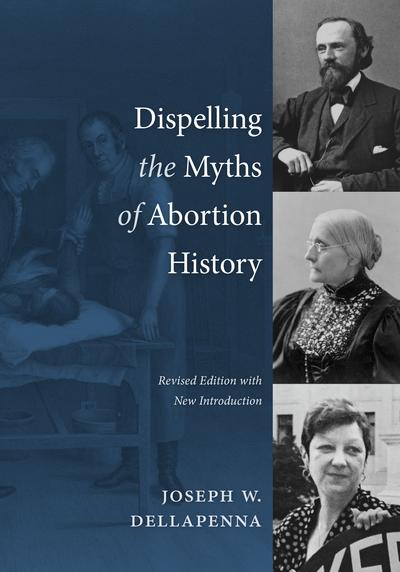 Dispelling the Myths of Abortion History

The revised printing of Dispelling the Myths of Abortion History is updated to reflect the Dobbs v. Jackson Women's Health Organization decision, the 2022 United States Supreme Court case that overruled its earlier decisions in Roe v. Wade (1973) and Planned Parenthood v. Casey (1992) and returned the issue of abortion to the States. The book retains its core discussion of Roe v. Wade, specifically how Justice Harry Blackmun structured the argument of the majority around the history of abortion laws. That history built on the work of law professor Cyril Means, Jr., and historian James Mohr. Means and Mohr proclaim four theses as summarizing the "true" history of abortion in England and America:

(1) Abortion was not a crime "at common law" (before the enactment of abortion statutes in the nineteenth century).

(2) Abortion was common and relatively safe during this time.

(4) The moving force behind the nineteenth-century statutes was the attempt of the male medical profession to suppress competition from competing practitioners of alternative forms of medicine.

This book dispels these myths and sets forth the true history of abortion and abortion law in English and American society. Anglo-American law always treated abortion as a serious crime, generally including early in pregnancy. Prosecutions and even executions go back 800 years in England, establishing law that carried over to colonial America. The reasons offered for these prosecutions and penalties consistently focused on protecting the life of the unborn child. This unbroken tradition refutes the claims that unborn children have not been treated as persons in our law or as persons under the Constitution of the United States.

"After making a mess of the abortion issue for the past 33 years, the [Supreme] Court would do well to seriously consider this [book]." —National Review Online

"[T]he book is a gold mine of information and interpretation." — The Human Life Review

"Professor Dellapenna's scholarly volume is now the leading work on the history of abortion in the United States. He shows that the criminal law prohibited abortion from colonial times and did so primarily to protect the unborn. Although he is himself pro-choice, his book gravely undermines the prevailing pro-choice version of abortion history, and the reasoning of the Supreme Court in ROE v WADE, that a constitutional right to abortion is consistent with the nation's history and traditions." — John Keown, Rose F. Kennedy Professor of Christian Ethics, Kennedy Institute of Ethics, Georgetown University

"Dellapenna's major focus…is the work of twentieth-century historians who allowed advocacy for abortion to overshadow their commitment to truth and intellectual integrity… Dellapenna's catalog of errors is depressing, albeit instructive and important reading." — Touchstone

"Let it be said at once that Dellapenna's patient labors have produced a masterpiece of scholarship that may justly take its place as the definitive treatise on abortion in Anglo-American law.... He brings to this otherwise well-worn subject fresh insight and a comfortable familiarity with Anglo-American legal history that other scholars can only hope to emulate." — First Things