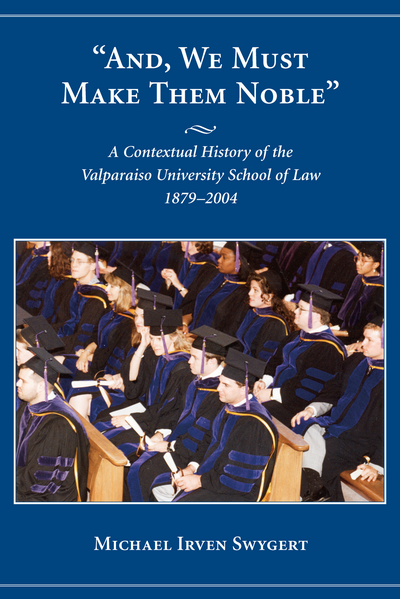 And, We Must Make Them Noble

A Contextual History of the Valparaiso University School of Law, 1879-2004

by Michael I. Swygert

America's law schools have evolved from diverse and often sectarian beginnings to the standardized and largely secular institutions of today. This book traces the evolution of one small law school in America's heartland—the Valparaiso University School of Law—and examines the men and women who fashioned a distinctive form of legal education, one that provides students with necessary knowledge and skills of law practice, while still furnishing opportunities for the development of moral, ethical, and religious values. These educational objectives were first articulated in 1940 by Valparaiso University President (the Rev.) Otto Paul Kretzmann, who declared in his inaugural address that the mission of a church-related institution is to make students knowledgeable, useful, wise, and "noble."

The story begins on the battle field at Gettysburg, where President Abraham Lincoln was speaking. Among those listening was a Union Army Colonel, Mark L. DeMotte, who, years later in 1879, founded the law school at Valparaiso. That school today is the thirty-eighth oldest accredited law school in America. By the early 1900s, the University was among the largest in the country, having close to 6,000 students, and the law school was the largest in Indiana. Yet, these heady times did not last. Facing a massive debt, the University in 1923 came close to being purchased by the Indiana Realm of the Ku Klux Klan. Fortunately, the planned sale never took place.

Instead, in 1925, Lutheran laymen seeking to establish a university for Lutheran families across America purchased the struggling institution at Valparaiso. The university's reputation was soon restored and a strong religious culture began to take hold. The University's religious culture, combined with the law school's small size, fostered a caring, personal, and value-oriented atmosphere in contrast to the standardized, depersonalized, and secularized climate existing at most law schools. Yet later circumstances made this model difficult to sustain.

The Valparaiso University law school traditions of small size, strong teaching, values inquiry, and religious culture became threatened, beginning around 1980. The chief cause was the stringent and externally-imposed set of rules for accreditation that were being applied to America's law schools, rules designed as much to raise the barriers of entry to legal education as much as to increase its quality. One result of these rules was that the University was compelled to build a costly and much larger law school building. But this, in turn, meant that more tuition-paying students would be needed. Within a decade, the faculty, student body, and staff doubled in size. The expansion, however, came at a cost to the school's distinctive character. These costs included less student access to faculty, and a de facto de-emphasis on the University's religious culture within the law school itself.

This book, besides providing an in-depth history of a distinctive law school, raises significant questions about the accrediting process for American legal education. Yet, despite the standardizing and secularizing forces of law school accreditation, the Valparaiso University School of Law's mission remains the same—to prepare students to be useful, wise, and noble within the values-oriented and religiously-derived culture and traditions of Valparaiso University.

And, We Must Make Them Noble is also available in paper binding.