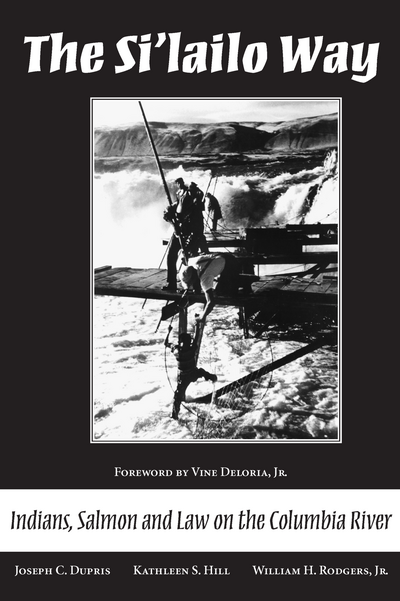 Indians, Salmon and Law on the Columbia River

This book traces more than a century of legal, political, and social battles waged by Columbia River Indians as they fought for the survival of wild salmon and their inherent right to harvest them. Many of the stories focus on Celilo Falls, a place of captivating natural beauty and spirituality that also served as a trade center for tribes throughout the Northwest. Celilo Falls disappeared under the backwaters of The Dalles dam in March of 1957.

The stories are told through the eyes and words of the people, especially the Indian people, who lived through them — from the 1855 Walla Walla Treaty Council proceedings through the fraudulent purchase of the Warm Springs Tribe's fishing rights (via the so-called Huntington Treaty) to the negotiations and payments made for the flooding of Celilo Falls. Each chapter features the creative (and often highly effective) legal means invoked by the Indians to protect their fisheries and their way of life. Several documents of historical value are reproduced in the appendix.

The Foreword is written by Vine Deloria, Jr.

"The work is highly recommended for those interested in Indian law, fishing rights, and the Columbia River and is a welcome addition to the numerous works on these subjects."
—Oregon Historical Quarterly

"There will never be a better book about the salmon wars… Part history, part biography, throw in biology, engineering, and the mindsets of players who did not understand or trust each other back in 1855, and still don't, here is a war history in the tradition of Bruce Catton and David Halberstram, with a touch for the English language rarely seen in this field."
—The Environmental Forum