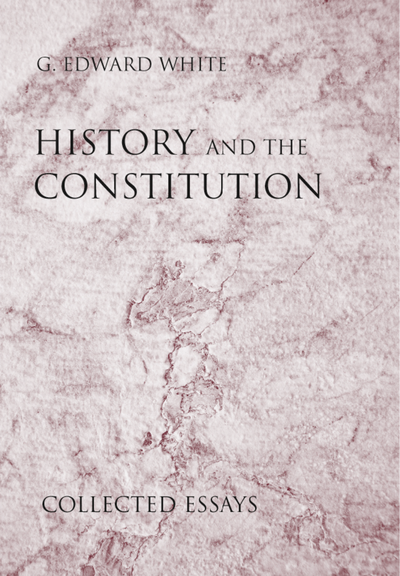 History and the Constitution

This collection of essays seeks to demonstrate the relevance of history to contemporary constitutional law by focusing on two themes. One is the emergence of a historical turn in constitutional decisions and commentary, with historically oriented methodologies playing and increased role in the analysis of constitutional issues. The other is the contribution those methodologies can make to the exploration of a variety of current topics, such as the role of scrutiny levels decisions in the Supreme Court's constitutional cases, the increased importance of international law rules, practices and norms in American courts, the emergence of the terms "center" and "centrist" as descriptive labels for the Court and justices, the internal powers of the Chief Justice of the United States, and the distinctive jurisprudential orientation of the Rehnquist Court.

Taken together, the essays make the claim that since there is a strong link between history and the analysis of legal issues, that analysis can be enhanced through the felicitous use of methodologies derived from the study of history.

"This multi-faceted work effectively demonstrates the manifold ways in which constitutional law can be studied through a historical lens." — Harvard Law Review

"White is a scholar with impressive knowledge and insight about jurisprudential history, and he has provided a valuable service to the community of constitutional scholars and other interested readers by making his recent work accessible in a single volume." — Law & Politics Book Review

"This is a fine collection of essays on the Constitution and the Supreme Court by a very distinguished scholar… Summing Up: Highly recommended." — CHOICE Magazine