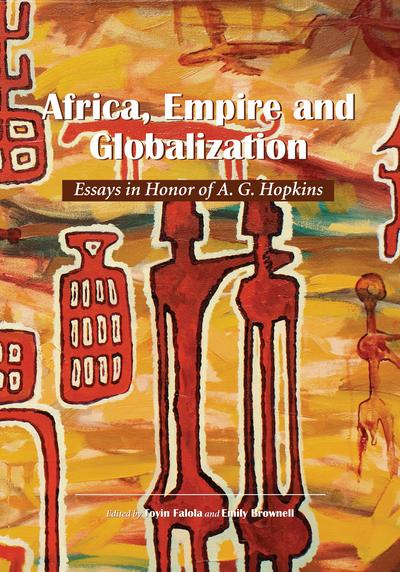 Africa, Empire and Globalization: Essays in Honor of A. G. Hopkins

Essays in Honor of A. G. Hopkins

Previously published as a jacketed hardback, this book is now bound as a paperback.

Africa, Empire and Globalization is a set of original essays in honor of the distinguished historian, Professor A. G. Hopkins, whose career of over fifty years covers three main areas that are global in reach, but connect to ideas that are generated in such major cities as Lagos and London. The volume celebrates the key principles that have emerged from the cumulative body of Hopkins' work: searching for originality; extending the frontier of knowledge through new data and interpretations; questioning received assumptions and wisdom; promoting conversations between multiple, often divergent, sets of ideas from different disciplines; presenting ideas such that those within and outside of the academy can benefit; and applying theories drawn from various disciplines to organize the evidence and to present it in digestible form.

The first section covers Africa, with essays on the economic history of Lagos and West Africa, the connections between economic change and imperialism, and the role of Africa in the world economy, including the trans-Saharan, trans-Atlantic, and the Indian Ocean World. The role of Africans in creating wealth and responding to new economic opportunities receives prominent attention in some chapters. In the second section, new topics on imperialism are explored, such as the British expansion to India, the role of trade in the Gambia, and the overall impact of the empire. Hopkins' idea of "gentlemanly capitalism" generates considerable debate in various chapters, and is also applied to various contexts and places. The current issues around the theme of globalization are developed in the third section in terms of the relevance of the concept, the contributions that historians can make to the subject, the arguments for and against, and its impact on capitalism and democracy. From peace to war, from economic prosperity to economic decline, from the use of power to nationalist resurgence, the section looks at the dominant concerns of our time.

Hopkins' career, as the volume amply demonstrates, is rich, held together by interest in the connections between the local and the national, the national and the regional, and the regional and the global. In thus interconnecting the world, a philosophy of history emerges—how economic forces shape political realities. His work, while being quite broad-ranging spatially, has remained topically focused on economic history, for the most part. This emphasis will be a large part of what he passes on to future scholarly generations. As we pay various tributes through the original essays collected here, we believe that, for our shared benefit, Professor A. G. Hopkins has demonstrated how to remain candidly involved in the debates over one's work, to defend oneself when appropriate, to reconsider one's work when necessary, and continually to build upon one's own body of work in compelling and relevant version.

"This weighty and impressive book is a thoroughly appropriate scholarly festschrift for Tony Hopkins.…Wherever one cares to dip into the volume, one finds finely crafted, densely textured pieces of historical research." — Journal of African History

"[A]n important volume and a fitting tribute to the work of A.G. Hopkins.…[T]he anthology may look and feel like a tome, but it is a delight to read. The breadth of topics and careful scholarship should ensure this collection receives a broad readership and stimulates further debates over Africa, empire, and globalization." — H-Net Reviews

"…this is not a deferential miscellanea, but a volume of the widest interest to all those who practise in the fields in which Tony Hopkins has worked. It is the best possible tribute." — The Journal of Imperial and Commonwealth History