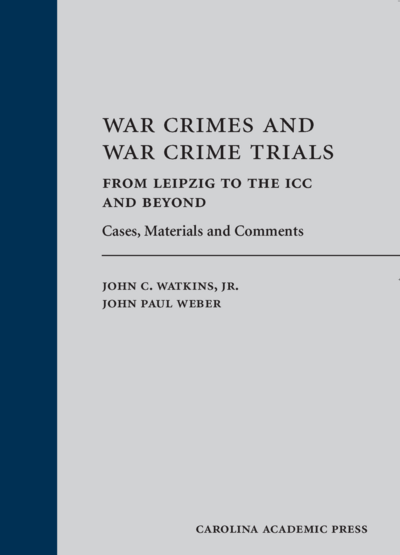 From Leipzig to the ICC and Beyond: Cases, Materials and Comments

This is the 2018 paperback printing of the casebook published in 2006.

This is both a casebook of selected war crime decisions by various national and international tribunals in the twentieth and early twenty-first centuries as well as a brief historical account of the geopolitical, diplomatic and military events surrounding them. The text is divided into six parts arranged in chronological order, beginning with the Hague Peace Conferences of 1899 and 1907 up to the Summer 2004 decisions by the Supreme Court of the United States, which dealt with transnational terrorism committed by United States' citizens as well as the Guantanamo Bay, Cuba, detainees held under the authority of the Bush Administration.

War Crimes and War Crime Trials contains edited excerpts from forty-four judicial opinions embellished with a congeries of international, national, military and political documents that add context to the case law. The editors have included fairly extensive selections from some of the major materials that have surrounded subsequent war crime litigation. Also included are an epilogue by Michael Ignatieff; an eleven-entry appendix; a glossary containing over 200 words; a reference section of over 1,400 citations from a wide variety of legal, historical and international relations literature; and a name and subject index.

"War Crimes and War Crime Trials: From Leipzig to the ICC and Beyond — Cases, Materials and Comments edited by John C. Watkins, Jr. and John Paul Weber is the most complete book on the subjects to date. In these challenging times, it is an essential reference for all who study or are engaged in the events brought about by September 11, 2001." — Frank J. Williams, Chief Justice of the Supreme Court of Rhode Island and Member of the Military Commissions Review Panel

"Skillfully edited, the book weaves together an eclectic tableau of primary and secondary sources drawn from major court decisions and scholarly commentary over the past century. The result is a versatile stand-alone text and reference that should appeal to students of law, political science, criminal justice, history, and international relations alike." — CHOICE Magazine