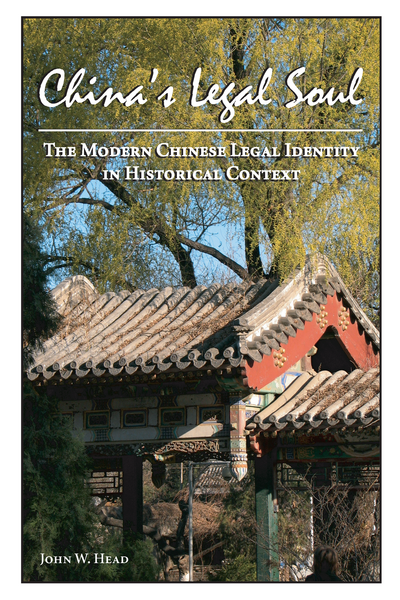 This new look at Chinese law and society reflects the "triple anniversary" that 2009 will mark for Chinese law reform. In 1979, the People's Republic of China embarked on a dramatic new phase of legal transformation; thirty years before that, in 1949, Mao announced the creation of the PRC itself, another moment of legal reorientation; and thirty years before that, in 1919, the May Fourth Movement also had legal reform at its core, as thousands of protesters in Beijing erupted at the refusal Western powers to acknowledge that China's legal system was no longer inadequate and uncivilized.

This claim––that China's legal system is inadequate and uncivilized in––remains in play today, particularly in respect of how China approaches the rule of law and human rights. Professor Head's new book (following his earlier work, Law Codes in Dynastic China) examines these issues by focusing on modern China's "legal soul"––by which he means the set of fundamental and animating legal principles or values that give a society its unique spirit and character. His lively and insightful comparison of contemporary Chinese law with dynastic Chinese law––readily accessible by (and written for) non-specialists––addresses these central questions: (1) what sort of a "rule of law" does today's Chinese legal system hope to achieve against its ages-old Legalist-Confucianist background; and (2) is there any modern correlative to the Imperial Confucianism that gave dynastic China its "legal soul," or is today's China "soul-less," as some would claim?

In addressing these questions, Head insists on looking beyond easy assumptions and assertions found in much Western legal literature about China and its law; instead, he relies heavily on leading contemporary legal scholars at Chinese universities and their views on politics, constitutionalism, and rule of law in China.

"Readers will be impressed by the wide variety of sources cited in China's Legal Soul's footnotes and by the book's detailed tables. ...[I]t is appropriate for nonlawyers with an interest in legal philosophy or Chinese history and is recommended for university and law school libraries." — Law Library Journal