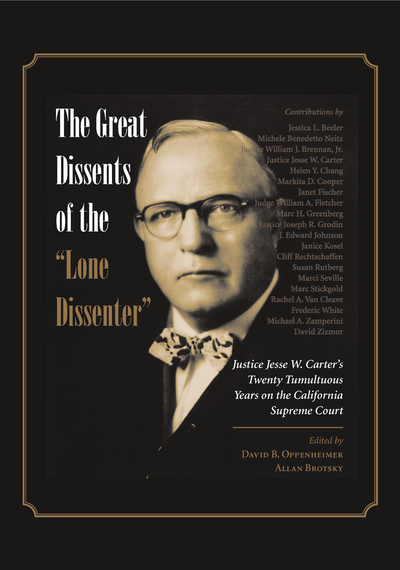 The Great Dissents of the "Lone Dissenter"

Jesse W. Carter served as a justice on the California Supreme Court from 1939-1959, where he was known as "The Lone Dissenter" because he wrote so many solo dissents. Many of these opinions were in passionate defense of civil rights, civil liberties, and the rights of labor, criminal defendants, and personal injury victims. Several of the cases were reversed by the United States Supreme Court, or by later decisions of the California Supreme Court, adopting Justice Carter's reasoning. This book combines essays on several of those dissents, written by faculty and friends of Golden Gate University School of Law, where Carter earned his law degree in 1913, as well as an essay on the role of dissenting opinions by another great dissenter, Justice William Brennan.

"Jesse Carter's position on the frontier of legal change is clearly discernible, and quite remarkable… Shortly before Carter's death in 1959, he expressed the hope that a 'hundred years after I am dead and forgotten, men will be moving to the measure of my thought.' I wouldn't want to best against it." — Joseph R. Grodin, Associate Justice (Ret.), California Supreme Court

"Jesse Carter's life would be unimaginable in this century. He was born in a log cabin, had only a few years of formal education, yet rose to Justice of the highest court in California, where he showed unlimited courage and unparalleled confidence in his own ideas, though most were far ahead of his time. It's a fascinating story of a true western character—a legal page turner." — Barbara Babcock, Judge John Crown Professor of Law, Emerita, Stanford Law School, author of Woman Lawyer: The Trials of Clara Foltz (forthcoming 2010; Stanford U. Press)