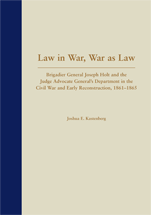 Law in War, War as Law

During the Civil War, the Union Army grew from a semi-professional force of 12,000 to a force of almost one million citizens. The unique disciplinary requirements for this citizen army were only one facet of the nation's unique wartime needs. Lincoln believed, with credibility, that a dangerous enemy resided within the north, and the common civil laws were not strong enough to contain this enemy. To achieve a disciplined military and to defeat the internal enemy, Lincoln turned to Joseph Holt, nominating the former Secretary of War to the position of Judge Advocate General of the Army.

A friend of Edwin Stanton, Holt not only oversaw a multitude of military trials, he also staffed his Judge Advocate General's Department with ideologically anti-slavery men. These men, several of whom were educated at Harvard and Yale, in turn not only used the law to ensure a disciplined force, they also used the law to attempt to force a concept of colorblind legal equality on the southern states, so that a rebellion could never again occur. In essence, several of these men believed that the Constitution's survival required racial equality. As a side product of their efforts, these men also contributed to the development of international law.

A pre-war defender of slavery and Democrat, Holt evolved into a champion of equality as well, because he viewed secession as a greater evil. In waging a war through the law, the Judge Advocate General's Department utilized the existing law to its maximum extent, and only rarely did its officers intentionally violate clear proscriptions against Civil Rights. The Judge Advocate General's Department succeeded against Lincoln's adversaries, but it was unable to defeat all enemies, or create a long-lasting racial equality in the South. This book addresses the actions of the Department during the nation's worst conflict.

"This history of the Army Bureau of Military Justice in the Civil War [E]ra is a well-researched work that may well become a classic. ...This book is highly recommended for any serious student of the military or legal history of the Civil War Era." — Burrus Carnahan, George Washington University

"While Kastenberg correctly focuses primarily on the expansion of military jurisdiction orchestrated by Holt during the Civil War, he does not overlook the birth of the American Army's interest in the law of armed conflict. ...Law in War, War as Law is for the expert who wants to drink deeply at the well of military legal history..." — Fred L. Borch III, Military Law Review