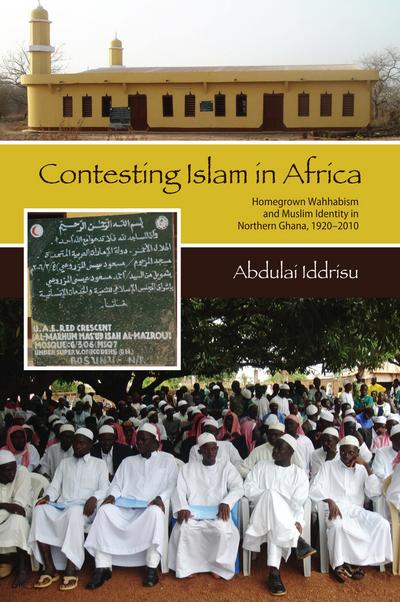 Contesting Islam in Africa examines the experiences of "returnee" scholars, an emerging class of elites trained in Saudi and Egyptian theological universities, and their role in educational initiatives and the reconfiguration of Muslim identity in Ghana between 1920 and 2010. Based on oral interviews and significant archival work in Ghana and at the National Archives in London, the book addresses three questions: How did the returnee scholars conceptualize and rationalize local politics and Muslim life in a pluralistic society where Muslims are a minority? How did Ghana's colonial and post-colonial governments react to the transnational spaces constructed by Muslims generally? And, given the returnee educational imperative, what has been the Saudi and Egyptian influence on the formulation of Muslim culture in Ghana?

The book also explores the influence of local mallams, in particular Alhaji Yussif Soalihu (Afa Ajura), who was indefatigable as he almost single-handedly spread Wahhabism in Ghana. For any meaningful understanding of reform Islam and the "returnee" scholars in Ghana, its essential to appreciate the many facets of the life of Afa Ajura. The activities of Afa Ajura and his literate assistants created public controversy and sometimes led to open confrontation with religious adversaries, the Tijaniyya fraternity. These activities redefined intra-religious conflagration and turned Afa Ajura into a religious phenomenon. The many violent confrontations that ensued also attracted the attention of external actors not only interested in spreading reform Islam, but also interested in integrating Ghanaian Muslims into the wider world of Islam. This book argues that Salafism/Wahhabism was and in many ways remains a homegrown religious phenomenon that benefitted primarily from preexisting splits within the northern Ghanaian Muslim community. It also argues that transnational Salafism/Wahhabism and Middle Eastern and North African contact—especially through education and outreach programs—only provided the ideological justification and the grammar for reinterpreting the common good and for reconfiguring local social and political sensibilities.

"The influence of Wahhabism in sub-Saharan Africa remains one of the least-investigated areas in African studies at a time when tensions, mistrust and religious conflicts have increased. By examining the role of the returnee ulama (Muslim scholars) and their organizations in creating new Muslim identities modeled on their Arab funders, in stark contrast to the Africanized versions of Islam practiced by their own parents, grandparents or relatives at home, the book promises to shed new light on the changing face of Islam in traditionally peaceful and tolerant Muslim societies of sub-Saharan Africa." — Fallou Ngom, PhD., Associate Professor of Anthropology & Director of the African Language Program, African Studies Center, Boston University

"The study of Islam in Africa has not attracted a lot of scholarly attention because the focus has tended to be on the colonial project in Africa. The great moment in the manuscript is when the author asks this question: 'How do we explain the intensity of these clashes – Muslim against Muslim – in a religiously plural country where Islam remains a minority religion?' This is an important question because the tendency has been to see conflict between Muslims and non Muslims and yet this book promises to provide a totally different type of analysis. The manuscript provides insightful overview of some of the tensions in the past, by looking at conflicts that have occurred in the past. … Using lucid and great narrative, analytical and interpretative style, the author takes on a rich array of issues that have not attracted a lot of attention in African history. It is a project that deploys primary and secondary sources in a remarkable manner. It will be a useful addition to literature on the spread of Islam in Africa. It is likely to have a great impact on our knowledge of Islam in West Africa in general and Ghana in particular." — Maurice Amutabi, PhD, Associate Professor, The Catholic University of Eastern Africa, Nairobi, Kenya

"The author was able to connect the spread of Islamic education in line with the Saudi Wahhabi doctrine fueled by the return of graduates from the Islamic University of Medina and the influx of Islamic books that promote the Salafy ideology into Ghana and the decline of Tijaniyya in Ghana." — Dauda Abubakar, African Studies Quarterly