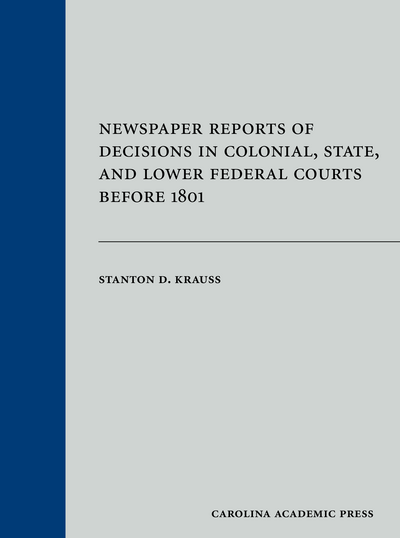 Newspaper Reports of Decisions in Colonial, State, and Lower Federal Courts Before 1801

This book, like Gentlemen of the Grand Jury, is an effort to make more of our eighteenth-century legal history accessible to modern lawyers and scholars. It does so by providing newspaper stories about cases of which the reporters and contemporary pamphlets provide no, or an incomplete, account, along with a comprehensive index that facilitates research on particular topics.

In addition to stories about court proceedings, each case report contains transcriptions of all of the extant newspaper commentary on the case, as well as any accounts of the crime, investigation, and punishment in criminal matters. Where a partial case report has already appeared, or where other relevant documents were published here in the eighteenth century, citations thereto are included in the footnotes. Appendices report significant legal incidents in which no trial court decision in a pending case appeared in the newspapers.

These documents shed abundant light on the substantive law and civil and criminal procedure of eighteenth-century America. They also reveal a good deal about the gap between the law on the books and the law in action in that era. As a result, this book will be of great value to legal and social historians, lawyers searching for the original understanding of the Bill of Rights, and ordinary Americans interested in our country's history.

This two-volume treatise is available only as a set and is part of the Legal History Series, edited by H. Jefferson Powell, Duke University School of Law.