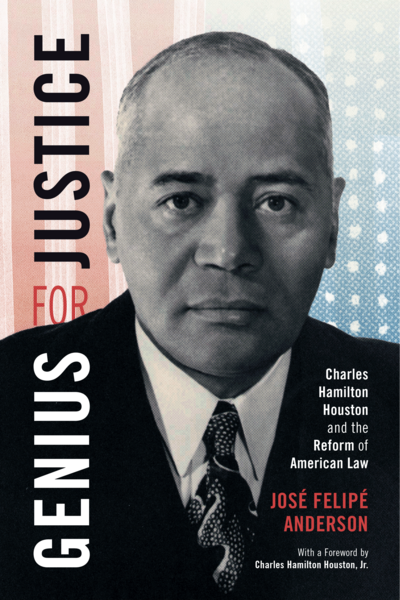 Charles Hamilton Houston and the Reform of American Law

Dr. Charles Hamilton Houston was an outstanding Harvard-trained Supreme Court lawyer for the NAACP. As Dean of Howard University Law School, he mentored future Supreme Court Justice Thurgood Marshall. As architect of the Brown v. Board of Education case, he is often called the man who killed "Jim Crow." This unsung African-American hero also transformed American law in labor, criminal justice, and the First Amendment.

"Professor José Anderson has produced a wonderful biography of Charles Hamilton Houston, the pioneer in the fight for desegregating America and the mentor to Justice Thurgood Marshall. The book is a must-read for anyone interested in the history of the civil rights movement and in the quest for 'a more perfect Union.'"
—Richard L. Revesz, AnBryce Professor of Law and Dean Emeritus, New York University School of Law.

"Charles H. Houston was the most brilliant and courageous legal freedom fighter in 20th century America. His peerless intellect and matchless will to fight for justice set a high standard that even his more famous student, the great Thurgood Marshall, aspired to. This magisterial book lays bare the sheer genius and profound love of Black and vulnerable people that sit at the center of Houston's life. His prophetic Christian fire led to his early death, but we should never forget his gifts to Black freedom and American democracy!"
—Dr. Cornel West, Professor Emeritus, Princeton University

"Brown v. Board of Education is the best-known Supreme Court decision of the 20th century. Thurgood Marshall is the jurist most associated with that decision. What is less well known is the lawyer who devised the long-range, carefully-orchestrated legal strategy. Charles Houston was the visionary who developed and implemented the legal strategy. Professor José Anderson's engaging, carefully researched and thorough examination of Houston's profound contributions finally gives the credit that is due to this 'genius for justice.'"
—Leland Ware, Louis L. Redding Chair of Law and Public Policy, University of Delaware

"Before Black Lives Matter, Martin Luther King and Thurgood Marshall there was Charles Hamilton Houston. With Genius for Justice, Anderson has written a fresh and captivating look at one of the architects of the modern civil rights movement, while providing an essential read for anyone interested in the long crusade for racial justice in America."
—Mick Caouette, Film Producer, Mr Civil Rights: Thurgood Marshall and the NAACP