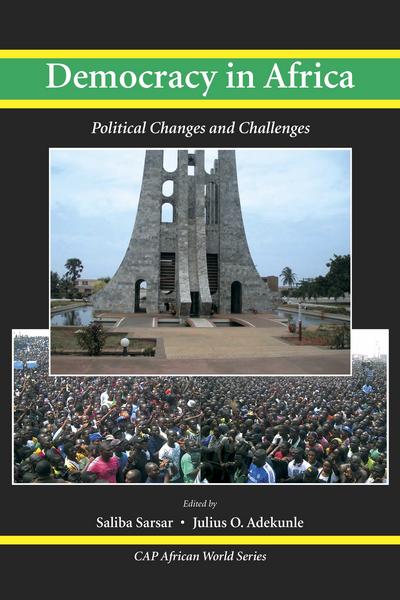 Democracy is an enigma in contemporary Africa. Although elements of democracy existed in African politics in the pre-colonial times, the European penetration and subsequent colonization provided the gateway for the prevalence of Western form of democracy with the practice of the parliamentary system. As each African state gained independence, beginning from the mid-twentieth century, political leaders mostly followed the Western democratic process. Africans now choose their leaders through electoral processes, but other pertinent factors make the full practice of democracy difficult.

The purpose of Democracy in Africa is to assess the level of democratic practice and to identify and analyze the political changes and challenges facing African countries. Shortly after independence, many African nations experienced political turmoil through military intervention in politics, which directly suspended democratic process. The popular uprisings and crises in North Africa, mainly in Egypt, Libya, and Tunisia, bear testimony to the need for the implementation of democracy in these and other African countries. These events call for political leaders to adopt and respect democratic principles, concentrate on good governance, and promote political stability.

Democracy in Africa is a novelty in its approach and depth of analysis. It adopts the Status of Democracy Index to measure the democratization process in selected African countries. The analyses in this book represent what operates elsewhere in Africa. This book is directed to the general public, undergraduate and graduate students of history, political science, and international studies.

"The idea that Africa's search for democratic governance is incomplete but alive is a truism for many Africanist scholars. This engaging book takes up that assertion and assesses it with examples from a range of African states. While the authors of the book employ a variety of theoretical approaches, they reach the same conclusion: the path of democratization in Africa must be "home-grown" and that outsiders can only help move the process forward. This book is a must read for anyone who wants to understand the dilemmas of political development in Africa." — Eric E. Otenyo, Northern Arizona University, Flagstaff

"Yet another apposite contribution to ongoing discussions and analyses of African politics, history, and society in the twenty-first century — particularly in light of recent events in Egypt, Libya, Tunisia, and Sudan. This book makes it resoundingly clear: African democracy and political participation have to be, and are indeed, homegrown. They have to be." — 'BioDun J. Ogundayo, University of Pittsburgh, Bradford

"Democracy in Africa: Political Changes and Challenges offers an insightful and interdisciplinary approach to the development and failure of democratic institutions in a breadth of African countries not found in any other scholarly work. By examining the struggle to establish — and in some cases reestablish — the political infrastructures and ideologies in large and small African states with different colonial, religious, and ethnic histories, this collection should be mandatory reading for anyone with an interest in the past, present, and future of African politics." — Steven J. Salm, Xavier University of Louisiana