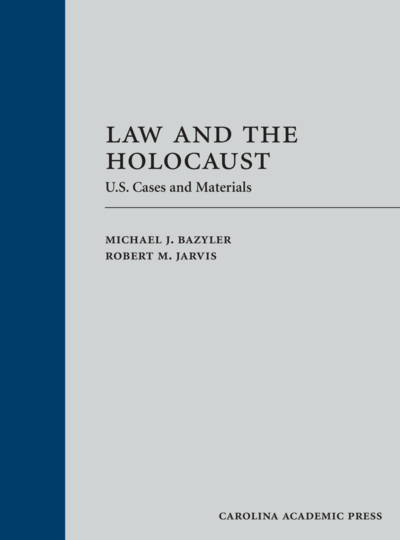 Law and the Holocaust

Law and the Holocaust: U.S. Cases and Materials uses federal and state court decisions to teach students about one of humanity's greatest calamities. Part I situates the Holocaust as a legal event. Part II focuses on the prosecution of Nazi war criminals. Part III describes the efforts of Holocaust victims to obtain financial compensation through civil lawsuits. Lastly, Part IV considers the extent to which the First Amendment protects modern Nazis. The first casebook of its kind, Law and the Holocaust features 71 principal cases, 295 notes, 26 statutory appendices, 31 photographs, and 3 maps.

Interspersed with the edited court decisions are helpful notes and excellent discussion points, along with citations to other sources and articles. There is also available a teacher's manual of about 100 pages with helpful hints, resources, and suggested lines of inquiry and discussion. The teacher's manual is not a mere afterthought, the writing of which was delegated and hastily assembled. It is polished and reflective.

Law and the Holocaust represents a watershed moment in Holocaust studies: a textbook of pleasing utility and ease-of-entry for law teachers. It boasts 71 cases, 295 notes, 26 statutory appendices, 31 photographs, and three maps – more than enough material for a meaningful law school course." — The Law Teacher: The International Journal of Legal Education (2018)

"Law and the Holocaust is the impressive output of an evidently herculean effort. While there are some previous examinations of US court cases related to Nazi Germany . . . it is not a particularly well developed field of study considering the vast amount of post-Holocaust litigation in American courts. So the achievement of selecting the cases and extracts, compiling them into a coherent whole, and adding editorial comments . . . must be applauded . . .

[P]ost-Holocaust ligitation has raised doctrinal and professional ethical issues for American law, and many of these are well brought to light in the book. It opens with a long introductory section on Nazi history . . . The subsequent introductory section, headed 'Germany's Judges' focuses more directly on the Nazi legal system, using an extract from the Nuremberg Justice case to explicate the workings of the judiciary . . .

The introduction is followed by three additional sections. Part II covers war crimes trials against the perpetrators; Part III covers cases about restitution for the victims; and Part IV, titled 'Other vestiges,' incorporates a range of other Nazi-related litigation, including for example first amendment cases around people expressing religious or other views related to their direct or secondary experience with the Holocaust and Holocaust denial and hate speech ...

[T]he focus of the book is on technical questions for American law raised by post-Holocaust cases before US course, and ... professional issues associated with practising the law in the US." — Holocaust Studies: A Journal of Culture and History