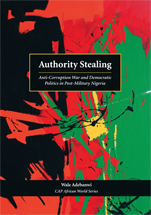 The post-Cold War world has produced a global consensus on the devastation caused by corruption in society. However, in spite of the growing awareness of the danger that corruption constitutes to democracy and development, and the growing number of anti-corruption agencies in Africa in the last decade, there is yet no elaborate scholarly focus on these agencies, most of which were created in the wake of the recent expansion of multi-party democracy in Africa. As a corrective to this, Authority Stealing chronicles the story of Nuhu Ribadu, arguably Africa's most courageous and most successful anti-corruption Czar and former head of Nigeria's Economic and Financial Crimes Commission (EFCC). The book places the anti-graft exploits of Ribadu in post-military Nigeria on a larger canvass of the crisis of nationhood in a country in which public office is regarded as an 'eatery.'

This revealing and riveting narrative of one of Africa's biggest cesspools of graft explains how the systemic or structural crisis which reproduces a thieving ruling class in a typical postcolonial state has pushed a country with an abundance of human and material resources to the bottom of the global human development index. This crisis has also led to the phenomenon of the advance-fee fraud, otherwise known globally as 'Nigerian 419' or 'Nigerian Scam.' While focusing on the era of democracy in Nigeria, the book uses biographical, structural and historical perspectives covering fifty years of Nigeria's existence, illuminating the paradoxes of anti-corruption campaign in Africa.

This book, which is based on ethnographic and archival materials, supplemented with interviews with key dramatis personae, will appeal to a variety of audiences and disciplines, including Africanists, anthropologists, political scientists, sociologists, historians, economists, policy makers, international development experts, criminologists and investigators of international crime syndicates, global anti-graft agencies and activists, and lay readers interested in the issue of corruption around the world.

"The reader will find him or herself … cringing at the extent of debauchery that has enveloped Africa's most populous state. Adebanwi's writing appears most fluent and concise when he tackles head-on the corrosive nature of political decadence and corruption, and the multifaceted vision employed by [Nuhu] Ribadu and his contemporaries at the EFCC to rid the nation of this cancer.… [A] salient document depicting an important crusader for justice…" — Professor Chinua Achebe, author of Things Fall Apart, and David and Marianna Fisher University Professor, Brown University

"Will the cesspools of corruption in Nigeria be forever drained and will this great nation discover a path to democratic prosperity? That is the question which confronts us on almost every page of Adebanwi's searing exposé." — Richard Joseph, John Evans Professor of International History and Politics, Northwestern University

"Authority Stealing documents how discovering, documenting, publicizing, and gesturing at eradicating corruption have constituted the most common methods with which regimes have been compromised, and regime changes have been justified, in Nigeria since independence. When Adebanwi concludes that corruption seems to have become a key instrument of state policy in Nigeria, he cannot be faulted. This book provides the evidence to theorize corruption discourse as the main instrument with which Nigerian rulers invent legitimacy, induce consent from the governed, nurture public goodwill, and sustain continuation. Governance in Nigeria thrives on corruption!" — Adeleke Adeeko, Humanities Distinguished Professor, The Ohio State University

"Readers will be rewarded with a thorough education in the personalities, practices, and political culture that allow billions of dollars of Nigerian state revenues to disappear every year." — Foreign Affairs

"Wale Adebanwi has written an important and illuminating account of Nigeria's anti-corruption war during Nuhu Ribadu's courageous leadership of the Economic and Financial Crimes Commission (EFCC) ... Adebanwi is good at navigating the thickets of conflicting information that emanated from each high-profile corruption case." — Journal of Modern African Studies