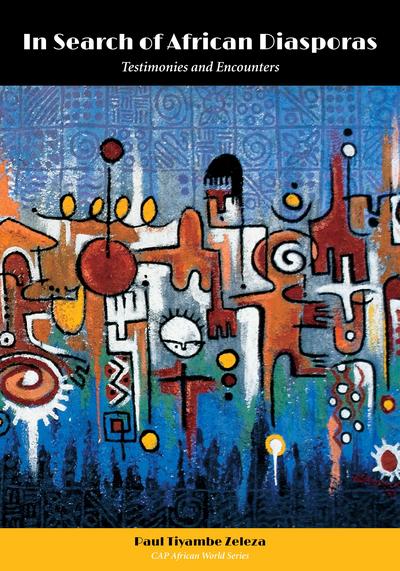 In Search of African Diasporas

This is an ambitious and brilliant book by one of Africa's leading diaspora intellectuals. A combination of a researcher's field notes, a travelogue and personal memoir, it is unusual in African writing. It is the first book by an African scholar to take us on such an amazing analytical and narrative journey in search of African diasporas around the world from Latin America to the Caribbean, Europe and Asia. It is filled with analytical insights, captivating stories, and intriguing observations on the complex histories and experiences of African diasporas, their triumphs and tragedies, perils and possibilities, and their enduring struggles for belonging, for their humanity. Its inimitable passions are leavened by engaging humor, its scholarly analyses by a novelist's eye for local context and color.

The author seeks to address the perplexing question of what it means to be a person of African descent living outside of the African continent. He offers the reader fascinating and richly textured portraits and surveys of the diversity of diasporic lives as well as the abiding connections of the diaspora condition. What makes this book particularly gripping are the multilayered narratives, the braided stories and explorations of African diasporic lives across many contexts and places as well as the author's own life during the period of his travels from 2006 to 2009. Also skillfully interwoven are the author's daily encounters and observations, information and reflections from interviewees from all walks of life, and the larger structural contexts of diaspora struggles for enfranchisement and empowerment.

For all the gruesome exclusions, vulnerabilities, and marginalities African diasporas have suffered in their various abodes, this is a remarkable tale of diasporic agency, a celebration of their lasting contributions to the construction of the modern world in all its manifestations.

"Paul Tiyambe Zeleza has been thinking about and living with pan-Africanism and Diaspora before its second wave of popularity and has done the experiential and intellectual work. In Search of African Diasporas: Testimonies and Encounters takes us with him as he documents the existence of our various journeys and arrivals, and the ways we re-create and redefine an African world wherever we are. As we read this book, we are able to travel with Zeleza from Venezuela to Oman, across the Caribbean and throughout Europe, getting the flavors and colors of the African Diaspora in myriad locations." — Carole Boyce Davies, Professor of English and Africana Studies, Cornell University, General Editor, Encyclopedia of the African Diaspora

"For over a century, we have been flooded with Black American narratives of returning to Africa. Paul Tiyambe Zeleza, a distinguished African scholar, reverses the poles and seeks to discover the global diaspora—the descendants of slaves, migrant laborers, refugees, fortune seekers. Part memoir, part travelogue, part history, part critical interrogation, Zeleza has given us a brilliant compendium of richly detailed and astute insights into how contemporary black intellectuals and activists understand racism and blackness, and how the black world sees itself, its relationship to Africa, and the future. From Latin America to the Arab world, Europe to the sub-continent, Zeleza's fascinating journey takes place against a backdrop of globalization, growing divisions between rich and poor, ever greater displacement, heightened nationalism, and a genuine debate over the effectiveness of global black unity. Yet, as with Richard Wrights traveling observations a half-century earlier, Zeleza never avoids the hard questions or the difficult truths. A stunning achievement." — Robin D. G. Kelley, Professor of American Studies and Ethnicity, University of Southern California

"In Search of African Diasporas offers a landmark contribution to the growing scholarly inquest into the African Diaspora. Based on years of travel, discussion and reading, Paul Tiyambe Zeleza presents a veritable tour-de-force, generating an utterly unique account that fuses his travelogue of a modern Diasporic odyssey with a penetrating analysis that both interprets the Diaspora's larger meaning, while also inhabiting its migratory flows. Highly readable, perceptively written, geographically broad, and refreshingly critical, Zeleza's 21st century rendition of the timeless'travel diary' is sure to set the bar for those who are attempting to grapple with questions of identity, culture, and society in a fast-paced world of global change. Yet, anchored in history, this book is as much an artifact of the African Diaspora, as it is a current reflection on this persistently enduring modern phenomenon." — Ben Vinson III, Herbert Baxter Adams Professor of Latin American History, Johns Hopkins University, Author of Flight: A Tuskegee Airman in Mexico, and African Slavery in Latin America and the Caribbean

"A groundbreaking and powerful look at the African Diaspora in the world. Paul Tiyambe Zeleza's existentialist commentary on multiple African Diasporas reminds the reader of Richard Wright's Black Power in reverse: sincere, intimate and controversial. The novelistic descriptions of people and places also recalls some of the best travel narratives of Ryszard Kapuściński." — Manthia Diawara, Professor of Comparative Literature and Africana Studies, New York University, author of African Film: New Forms of Aesthetics and Politics

"Africa's memory and relationship with its diaspora is a troubled one, a mixture of ignorance, stereotype, sentimentality, alienation, admiration and distortions. All this is compounded by the fact that Africans have themselves not sought direct knowledge of its Diasporas. Paul Tiyambe Zeleza's book is an authoritative contribution to the initiation of Africa's own exploration of whatever happened to its descendants outside the continent and how they are faring today. It is a tour de force that combines the aesthetic sensibilities and descriptive force of a novelist and essayist that Zeleza is and the scholarly authority of a renowned African historian. The result is a fascinating encounter with Africa's Diaspora in the many places he visited. It is a gripping distillation of anecdote, personal reflections and analysis. Zeleza is an erudite traveler and thoroughly reliable guide whose account opens new vistas to the lives of Africa's dispersed descendants. The book is a must-read for anyone who seeks to understand the complex outcomes of the Presence Africaine in the world." — Professor Thandika Mkandawire, former Director of the United Nations Research Institute for Social Development, Chair in African Development at the London School of Economics, University of London

"…Zeleza writes with admirable clarity…in choosing to share the interactions of his fieldwork in this travel diary, Zeleza has produced a bold, challenging work…" — Studies in Travel Writing