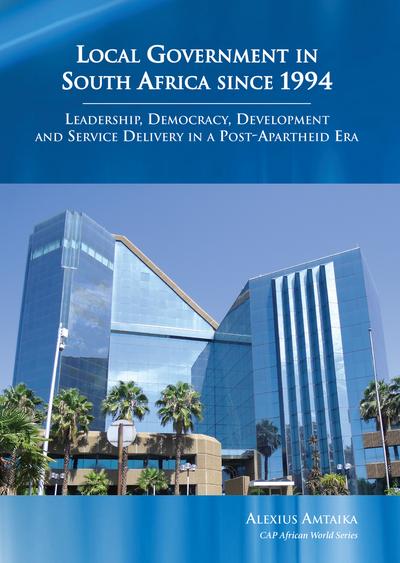 Local Government in South Africa Since 1994: Leadership, Democracy, Development and Service Delivery in a Post-Apartheid Era

Local Government in South Africa Since 1994

Leadership, Democracy, Development and Service Delivery in a Post-Apartheid Era

This uniquely written and enterprising book reasons that local authorities are created to play two essential roles, namely: (i) service rendering, which is a utilitarian consideration, and (ii) democracy, which is a civic consideration. The utilitarian dimension entails the efficient and effective rendering of services to citizens. It has a bias for recipient-citizens, but also recognizes the fact that citizens, in turn, have an obligation to pay for these services. The civic consideration deals with the values of participation, representation, local autonomy, responsiveness, and fairness. It entails commitment and participation of citizens in the decision-making processes of local government—or contribution of ideas. In this book, Alexius Amtaika develops a compelling form of growing body of knowledge and literature which contend that an effective local government is vital for the provision of goods and services, in partnership with communities, in order to allow the communities themselves to lead healthier and happier lives. He tailors together conceptual issues, classical historical facts, various legislations and empirical data into a single coherent argument, and stresses that the challenges facing local government in South Africa today are historical and systemic, embedded in, and inherited, from the British colonial government's Westminster Model, which was first introduced into South Africa in 1806 and passed on to, and adopted by, various governments in South Africa. He stresses that the changes that took place in South Africa in 1994 were structural changes, and that these change altered fundamentally the structures of old the apartheid government, but maintained the Westminster Model System of governance and government, which has been in place since the beginning of the 19th Century. His case is animated by provocative discussions of topical issues, such as freedom, equality, order, nation-building, democracy, development, leadership, elections, and service delivery.

"Amtaika takes a critical, yet exploratory view in providing a strong argument for the establishment and existence of local government as a distinct sphere in the post-apartheid state … It is a good example of how an academic book should be writtin: well-researched, well-organised and well-written." — Barry R. Hanyane, Journal of Public Administration 51(3.1)