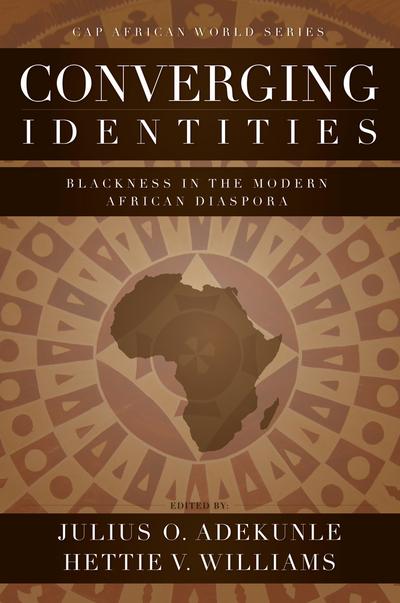 Blackness in the Modern African Diaspora

Converging Identities is a volume of sixteen essays analyzing the issues of blackness and identity of the African Diaspora in global perspective, but focusing on the United States, the Caribbean, and Latin America. Given the historical factors that prompted Africans to populate different parts of the world, the subject of blackness as a form of identity becomes relevant. In modern times, blackness and identity are popular subject matters in view of the historic election of Barack Obama as the President of the United States of America in 2008. Converging Identities provides a stimulating and enlightening perspective to blackness and identity of the African Diaspora.

"This book investigates the role of Africans in the development of host communities in which they settled, with their attendant antithetical consequences including loss of their African identity or Blackness. Sophisticated both in scope and content of analyses, this book will be invaluable to academic and non-academic audiences on African Diaspora correlated to the notion of identity formation and crisis ethno-cultural representation." — Apollos Okwuchi Nwauwa, Ph.D., Professor and Director of Africana Studies, Bowling Green State University

"Converging Identities is an invaluable contribution to the scholarly output on the Black/Africana Experience. It is culturally relevant for the citizens of modern Africa and historically pertinent to the ongoing reassessment of black ontology beyond the African continent." — BioDun J. Ogundayo, Ph.D., Associate Professor of French & Comparative Literature, University of Pittsburgh, Bradford Campus

"Converging Identities is a curiously sensitive and stimulating collection of essays that vividly capture the challenges and opportunities of the contemporary African Diaspora in the Americas in the realm ­of race, cultures, identity formations and transformations." — Emmanuel M. Mbah, Ph.D., Associate Professor of History, The City University of New York, College of Staten Island

"One of the key features of this book is its accessibility: the language is clear and chapters are neatly organized by broad themes according to geographical regions. Additionally, topics covered in sections are vast (from mental health to race films in France), and thus readers from a variety of disciplinary backgrounds and interests will find something to enjoy." — Portia Owusu, African Studies Quarterly