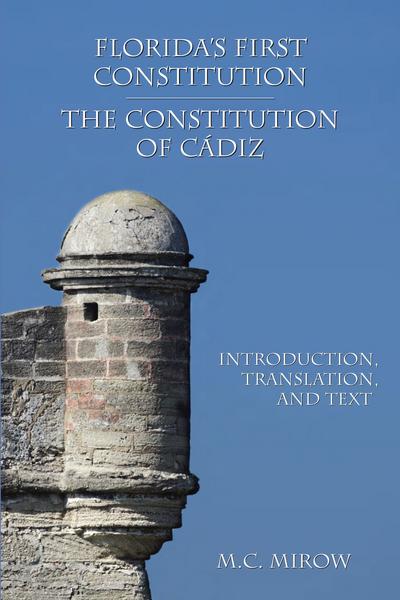 St. Augustine's central square, the Plaza de la Constitución, is not named for the United States Constitution. Instead, its name comes from Florida's first constitution, the Spanish Constitution of Cádiz of 1812. Daily political life in Florida's Spanish colonial cities was governed by this document, and cities like St. Augustine ordered their activities around the requirements, rights, and duties expressed in this Constitution.

This Constitution governed Spanish Florida from 1812 to 1815 and then again from 1820 until 1821 when Spain turned Florida over to the United States. Mirow explains the importance of this document to the Spanish colonial world and to Florida. He describes some of the most interesting features of the Constitution and its promulgation in St. Augustine. A fresh and authoritative translation of the entire Constitution is provided along with the Constitution's original text in Spanish.

"Matthew Mirow has contributed a wonderful nugget of history to the historiography of both Spanish Florida and the United states. ...This book is recommended [for] book collectors, classroom use, and the general reader of Florida's rich and proud history." — Colonial Latin American Historical Review (Volume 17, Number 4)

"In sum, Mirow provides an excellent introduction to the Constitution of Cádiz, viewing it from one province's perspective and making the text of the Constitution itself available in English." — Comparative Legal History (Volume 1, Number 1)