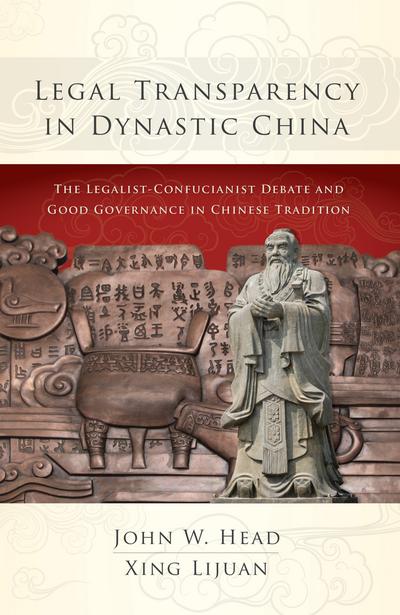 The Legalist-Confucianist Debate and Good Governance in Chinese Tradition

This ambitious book examines the notion of legal transparency from a unique cultural and historical perspective. Drawing from their combined academic and practical experience with both Chinese and Western legal traditions, authors John Head and Xing Lijuan explore how an intense debate — pitting legal transparency against legal opaqueness — unfolded in dynastic Chinese law, which began in the dark mists of history and ended formally just over a hundred years ago. They rely on a wide range of both Western and Chinese sources to explain how that great debate was resolved in the early Han Dynasty (around the third century BCE) in a way that molded Chinese law into a sophisticated legal system that for roughly two millennia balanced definitiveness with vagueness, predictability with flexibility, and egalitarianism with privilege — and that reflected cultural values still resonating in China today.

Legal Transparency in Dynastic China presents a clear narrative that assumes no prior expertise in Chinese law or history, and it caters to readers interested in issues of good governance, comparative studies, China, history, and law. The book begins by defining "legal transparency" and explaining where it fits into the larger context of the transparency-in-government movement that has gained such momentum in recent years, especially at the urging of Western powers. Then the book explains the fundamentally different values espoused by early Confucianists, for whom society is best governed not through written law but through the exemplary behavior of a highly educated, virtuous, and enlightened elite. After tracing the political and ideological challenges that the Confucianists faced from the Legalists, Head and Xing examine the compromise that resulted in the so-called "Confucianization of the Law" around 200 BCE. They then show how that alloy of competing ideologies characterized Chinese dynastic law for many centuries, resulting in what some would consider the most enduring and effective legal system in human history.