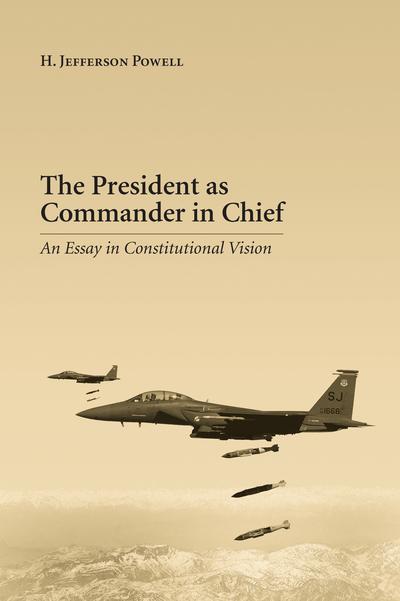 The President as Commander in Chief

An Essay in Constitutional Vision

The contemporary debate over the scope of the President's constitutional authority to protect national security reflects a seemingly unbridgeable gap between those who trumpet essentially unlimited executive power and those who seek to minimize the President's independent role. In The President as Commander in Chief, Powell proposes a different approach that begins with identifying the perspective that a conscientious President and his or her advisors should adopt in answering questions of presidential authority. Powell shows that the opinions of Robert H. Jackson as attorney general and associate justice outline a vision of the President's role in defending the Republic that is faithful to constitutional structure and history. Powell goes on to identify William H. Rehnquist's application of Jackson's vision at the Justice Department and on the Supreme Court, and to discuss the practical implications of his approach.

Legitimate disagreements will always exist about how to answer specific questions over the constitutional distribution of authority in the area of national security, in large measure because any plausible perspective must recognize the need to apply enduring constitutional principles to widely differing factual circumstances. But the current impasse over how to think about the issues is unnecessary. What Powell calls the Youngstown vision can guide executive decision making so that neither the claims of law nor the exigencies of national security is sacrificed.

"In The President as Commander in Chief, Jefferson Powell draws on his many years of teaching at Duke University School of Law and service with the Office of Legal Counsel during the Clinton and Obama administrations to prepare a thoughtful analysis of presidential authority to protect national security." — The Federal Lawyer

"The questions raised by Professor Powell's thought-provoking new work are a testament to the continuing importance of the debate over executive power, and to the ongoing relevance of Justice Jackson's Youngstown concurrence to that discussion. Professor Powell should be commended for the seriousness with which he takes the law; few in the legal academy remain so committed. In fact, one might suggest that it is precisely the rarity of an argument like the author's that permits and even encourages chief executives to manipulate the law in whatever way best suits them. Given that legal realism dominates so much of the legal academy, it would be a pleasant development were Professor Powell's call for a return to legalism to spur further discussion and research on the topic." — Benjamin A. Kleinerman, Congress & the Presidency