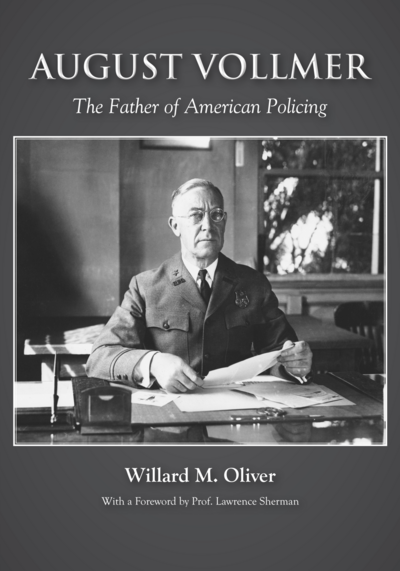 The Father of American Policing

Listen to the History Repeating Itself podcast with the author.

Watch this short YouTube clip of the author discussing Vollmer's use of bicycles in the Berkeley police department.

August Vollmer was one of the most extraordinary men ever elected town marshal and appointed police chief in American history. It was Vollmer who brought policing out of its wholly corrupt and often brutal era of politics, by professionalizing not only his own police department in Berkeley, California, but police departments across the country and around the world. He was instrumental in the creation of the polygraph machine (lie detector), patrol car radio communication systems, and, as the Los Angeles Police Chief, the first crime lab in America. His greatest legacy, however, was the higher education program he created at UC Berkeley, which developed into the disciplines of criminal justice and criminology that are so widespread today.

This riveting biography by Willard M. Oliver, ten years in the making, is the first single-volume, full-length biography of marshal, police chief, and Professor August Vollmer. It is a profound work of both biography and history, and brings to life the man who forever changed American policing and police education, reaffirming Vollmer's rightful title as "The Father of American Policing." Meticulously researched, the book draws upon newly discovered material, interviews, and writings of Vollmer's never before used, allowing Oliver to craft a richly detailed and fascinating narrative of Vollmer's life story. This magisterial portrait of one of policing's greatest leaders promises to reshape our understanding of both the man and his era and to rightfully restore August Vollmer as a household name.

"Every living American police executive—past, present or future—must read this book. The book's stories and details of Vollmer's life is a deep well of inspiration for resolving many problems of policing, both in the US and around the world." — From the Foreword by Prof. Lawrence W. Sherman

"This biographical examination of the life and times of August Vollmer is much needed and significant for our field. Oliver's unique ability to put it all into words gives us a final product that is essential for the ages." — Dr. Kenneth Peak, University of Nevada, Reno

"Especially in these troubled times, police, their critics, and students need the kind of perspective that history and biography provide. Oliver has done us all a great service by chronicling the career of the legendary August Vollmer, an accidental policeman who shaped a century of American policing, and police education, through his actions, teaching, writing, and dedicated protégés. One hopes for more books like this one, though Oliver has set a high standard." — Dr. Gary Cordner, Professor Emeritus, Kutztown University & Eastern Kentucky University

"The contributions of August Vollmer to professionalizing policing merit any superlative that might be applied. The phrase 'one person can make a difference in the world' is probably overused, but is certainly appropriate to describe Vollmer's influence. In writing this definitive biography, Will Oliver makes a contribution worthy of Vollmer's stature." — Dr. Larry T. Hoover, Sam Houston State University

"Although Vollmer was an internationally recognized leader in policing, to some extent he has been forgotten today. Oliver's book corrects this oversight: in addition to telling the story of the man, Oliver does an excellent job of providing the reader with an understanding of early 20th century policing within the context of that era's big city governments and societies. Accordingly, this is a must read for anyone interested in policing and criminal justice. — Larry K. Gaines, Criminal Law and Criminal Justice Books