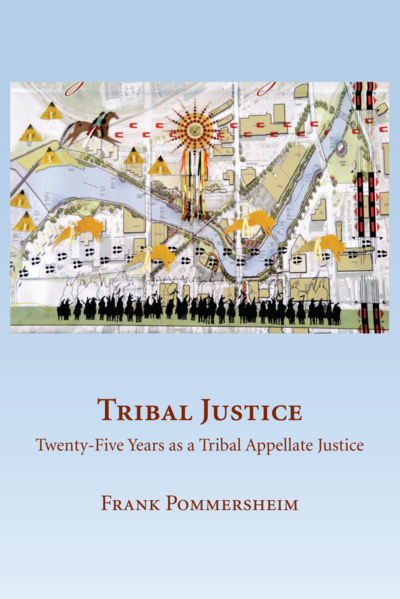 Tribal Justice is a book that provides an in-depth review and survey of tribal appellate court jurisprudence. The particular topics covered include enrollment and disenrollment, civil rights, elections and political participation, criminal law and procedure, rights of juveniles, tribal constitutions, and tradition and custom. The book focuses on the procedure and substance of tribal court appellate decision making as revealed in the text of actual court opinions. The decisions and accompanying notes are further amplified by the development of a model of tribal court jurisprudence and a discussion of various theories of tribal court judging.

"Frank Pommersheim is the modern apotheosis of Ksa, Nanaboozhoo, Quetzalcotl, Athena, John Marshall, and the Buddha—all legends of judicial wisdom. Tribal Justice is a powerful culmination of his career work so far, and gives us all hope for another quarter century of his judgment, experience, and calm thoughtfulness. As the Buddha (probably) said, Pommersheim ponders from the stars and judges from the sky, yet speaks from the heart and writes for the land." — Matthew Fletcher, Professor of Law, Michigan State University College of Law

"Every Tribal Judge should read this book. Written from the perspective of an able and seasoned Tribal Appellate Justice, it shares judicial perspective that is unique to members of the Tribal Judiciary. Justice is sacred. Native Justice is rooted in a world view that is starkly different than that of dominant society. We serve in Tribal communities but must deal with misguided federal law. This writing gives us guidance. Miigwetch, Frank!" — Michael Petoskey, Chief Judge, Pokagon Band of Potawatomi

"Professor Pommersheim's new book […] is a soul-searching and compelling look at the importance of tribal courts of appeals in the development of a body of tribal law that is responsive both to the needs of tribal citizens, who adhere to traditional notions of justice, and the non-Indian community, with well-reasoned court decisions that lay out clear parameters for law and order in tribal communities. By examining individual cases from several different tribal communities, one of which was examined by the US Supreme Court and one which is about to be critiqued, Professor Pommersheim demonstrates himself to be an indispensable player in the advancement of tribal justice in numerous communities. Having been involved in some of the cases chronicled in the book, and having served with Professor Pommersheim on appellate courts for approximately 18 years, I have seen first-hand Professor Pommersheim's commitment to ensuring that tribal appellate courts serve the needs of all litigants in tribal courts." — BJ Jones, Chief Judge Sisseton-Wahpeton Oyate Tribal Court; Director Tribal Judicial Institute, University of North Dakota School of Law

"Only a poet could so seamlessly intertwine memoir, practical how-to, and grand vision in one remarkable book about law and life in Indian country. Tribal Justice is deeply compelling, taking the reader on a more than quarter-of-a-century ride through an extraordinary career devoted to tribal law and the people from which it springs." — Angela Riley, Professor of Law, UCLA School of Law

"Professor and Justice Frank Pommersheim has once again written an inspiring book […] to be read and reread. His current writing and appellate opinions provide an essential guide to understanding tribal courts, specifically appellate courts. Justice Pommersheim's book is a must read by all legal and judicial practioners and tribal, federal and state leaders to understand the importance of the Tribal judiciary in protecting and enhancing the sovereignty of tribal nations. Respectfully, he shares his life with Indian people in a most graceful, intellectual, and poetic manner and emphasizes that justice, freedom and equality is for all." — Cheryl Demmert Fairbanks (Tlingit-Tsimpshian), Esq., Justice for the Inter-Tribal Court of Appeals for Nevada and White Earth Nation; Visiting Professor of Law, University of New Mexico's Southwestern Indian Law Clinic