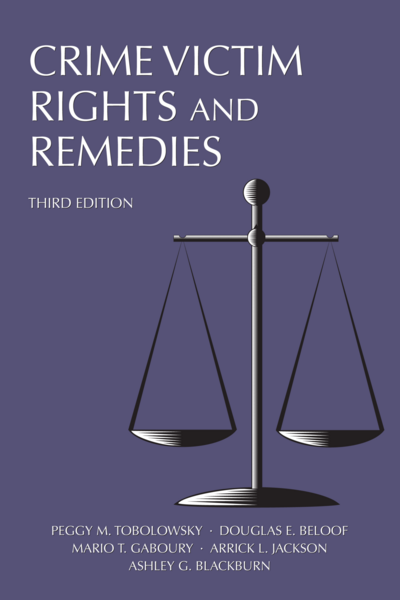 Prior to the emergence of a victims' movement in this country in the 1970s, crime victims had only limited formal rights and remedies in the modern American criminal justice system. With the active encouragement of those involved in the victims' movement and guidance supplied by a national Task Force on Victims of Crime, convened by President Reagan in 1982, federal and state authorization of crime victim rights and remedies has increased exponentially in the subsequent years. In fact, it has been estimated that there are currently tens of thousands of statutes that directly or indirectly affect crime victim rights and interests, as well as crime victim–related constitutional provisions in a majority of states.

The authors describe the constitutional and legislative provisions addressing the principal crime victim rights and remedies and leading judicial opinions that have interpreted them. In addition to presenting the current state of the law in this area, the text describes the status of implementation of these rights and remedies, relevant empirical research, and a sampling of pertinent policy analysis. This comprehensive portrait of the past and current status of crime victim rights and remedies in this country will inform the continued evolution of law and practice in this area.

The third edition of Crime Victim Rights and Remedies continues to address the evolution of key crime victim rights (e.g., the rights to notice of and to be present and heard at criminal justice proceedings) and includes the state constitutional amendments, legislation, court decisions, and empirical studies completed since the second edition in 2010. Of particular note is an expanded federal section regarding each right and remedy in the federal Crime Victims' Rights Act, enacted in 2004, and court decisions that have interpreted the Act in its initial decade of implementation. The third edition also adds a new chapter concerning crime victim rights and remedies in the United States armed services and internationally.